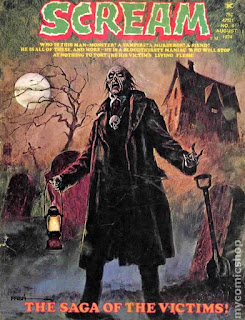 Salvador Faba provides the cover for this issue of Scream, cover dated August 1974. After two reprint dominated issues its great to be back to one that is all new stories.

We kick off with an Edgar Allen Poe adaption, "The Tell-Tale Heart" with adaption by Al Hewetson and art by Ricardo Villamonte. One of Poe's most famous stories, and this adaption is a rather faithful one. Our protagonist obsesses over the eye of the old man that is his employer. One night he spies on the old man while he lays awake in bed, then when the old man notices him rushes at him, causing the old man to have a heart attack and die. Our protagonist cuts up the old man's body and hides it in the floor boards. The next morning the police arrive, having heard our protagonist's scream the night before. He lets them around, growing more and more nervous as a beating sound starts occurring. Eventually this drives our protagonist crazy enough to tear open the floor boards, revealing the body beneath. Poe's story is a good one; although I was a little off put by how over the top and goofy at times Villamonte's art is.

Next is the Nosferatu series, with "My Prison in Hell" by Al Hewetson (story) and Zesar Lopez (art). Nosferatu asks for another of his guests to tell his tale, the pig-masked Anton Dubchek, who was commander of a Siberian prison camp. Dubchek is quite tough on his prisoners, for example throwing a prisoner down a pit for calling him a pig. The food served is slop, even for the guards, with the pigs eating better than the humans. Dubchek justifies his horrible treatment of prisoner by claiming they are criminals, lunatics and madmen. One of his prisoners, Zametov comes to him, claiming that a revolt is being planned and some of his guards are traitors. Zametov claims they are having a secret meeting and he can lead him to them, but when they arrive Dubchek realizes it is a trap and he is bound up and fed to the pigs. Back in the present, Dubchek takes off his mask and hood, revealing himself to be just a skeleton. While I continue to love the atmosphere this series brings and Lopez's amazing artwork, we are really getting to a point where the stories are very formulaic. This story has quite a similar ending to a previous story in the series where the protagonist reveals rats ate his body. It may be time to consider putting this series out to pasture. Also, speaking of the art, many panels in this story remind me of art from Fernando Fernandez stories for Vampirella, such as "The Truth". I'm wondering if Lopez either swiped them or they were taken from the same photo reference. Beyond that, Lopez's art also looks a bit more rushed than usual.

Third is "The Slither Slime Man Rises Again" by Al Hewetson (story) and Jose Cardona (art). The titular character, who was called Elias Mund when alive, rises from his grave once more. The narrative turns back to October 1953 in Savannah Georgia. We focus on the solitary life of Elias, still alive at this point, who lives alone in his home, acting as the town undertaker. We are told that Elias is disliked, taunted and shunned by the locals. On the night of Halloween, the hard of hearing Elias doesn't realize some trick or treators are at his door. They decide to play a trick on him, breaking into his home while in their costumes, of a vampire, werewolf and rotting corpse respectively. Elias meanwhile is reading about the supernatural and when they come in believe them to be the real thing. He kills them, only to then realize they are children. Distraught, Elias kills himself. He and the children are buried and ever since he periodically rises from the grave thinking he's got to cleanse the world. This is an origin story of sorts, featuring a character that appeared all the way back in Psycho #9. I'm wondering why we return to him now and if this is Hewetson starting up a series for what appeared to be a one-shot only character in his original appearance. We did see a character who looked a lot like him in a story in Nightmare #18, although he was just acting as a host in said story and called himself by another name.

Fourth is "The Mechanical Cannibals" by Rich Buckler (story) and Rich Buckler/Chic Stone (art). Stone is uncredited. This story is adapted from the story "From Fanaticism or for Reward" by Harry Harrison. We start the story with our protagonist, Jagen, acting as a sniper and killing a man. He then jumps through a door shaped portal that seems to bring him to another time and destroys any evidence he is carrying. Appearing to be on some mission, he transports to another place and after using another portal finds himself being barely able to breathe until another man brings him a respirator. He is told to ignore his instructions and follows the man, entering a hotel room where masked men pay him for the assassination job he performed. When they try to kill him, Jagen kills one of them and knocks out the other, fleeing. We then have what appears to be a time jump. A humanoid robot is ordered to go after Jagen, who has retired to a backwater planet where he enjoys hunting. The robot arrives and disarms Jagen, but rather than killing him, it shaves his head, scans his brain to learn who gave him orders, then departs. This story is quite an outlier to both the writing and art style we currently are seeing from Skywald, and from doing some research it appears that this story was originally intended for an aborted Skywald sci-fi magazine (from which other stories we've seen in the past were also intended for). I'm surprised they held on to it so long before publishing as I recall any other stories intended for that magazine appearing long ago. Perhaps at this point Skywald, who just had to do 2 nearly all reprint issues, is in a similar spot to what Warren was in at the end where it was publishing old inventory stories of low quality.

Fifth is the latest in the Saga of the Victims series, "I... Am Torment" by Al Hewetson (story) and Jesus Suso Rego (art). We continue right where we left off, with a pterodactyl swooping down and grabbing our heroines, Josey and Anne. Suddenly another pterodactyl appears and battles it, grabbing a hold of Josey and Anne once it kills its foe. It brings the two of them to a nest to feed its young, but we quickly realize it is on top of a volcano, which blows! Somehow the nest is able to carry our heroines away while the pterodactyls are killed, but it eventually sets on fire until they make it to the open sea. After sleeping, our heroines wake up right before a pirate ship! They are soon found by the captain and crew, all of whom are corpses, and force them to walk the plank. Suddenly a giant whirlpool forms, enveloping the ship and both Josey and Anne fall off into the water, about to be sucked down, until a giant tentacle grabs them! It is here where the story ends. This series continues to be totally bonkers, really putting our two heroines through the ringer. This particularly segment was a bit less interesting to me than the prior two, with the first half of the story in particular being a bit too light on story in order to give us a recap of prior events and the experience with the pterodactyls.