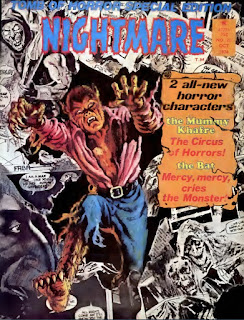 This issue of Nightmare has a cover by Salvador Fabia and carries a date of December 1974. It features a werewolf bursting through panels from several old Skylwald stories.

This issue's contents consist of what was supposed to be the first issue of The Tomb of Horror, which would have been Skywald's fourth horror magazine. Its theme was to have a host for each story, often the artist or writer for that story. Alas, that magazine never came to see the light of day and was included as part of this issue of Nightmare instead. The inside front cover features drawings of many Skywald contributors by Maelo Cintron.

We start with a "Tomb of Horror Introduction" by Al Hewetson (story) and Domingo Gomez (art). This two page feature is introduced by Gomez, who also stars in it, as he shows us various monsters such as Dracula, Phantom of the Opera, Frankenstein's monster and others.

First story is "The Tales of the Vulture: The Bat - Mercy, Mercy Cries the Monster" by Al Hewetson (story) and Jesus Martin Sauri (art). A vulture hosts this story, claiming he will use his feature as an opportunity to introduce various new characters that the reader has the ability to request more stories of. Brock Stans is a professor and archaeologist from Manhattan, yet while in the jungles of Central America he is attacked by a swarm of vampire bats. He makes it back to Manhattan, but finds himself transforming into some sort of man-bat. After attacking and killing a woman he justifies it to himself thinking he is somebody now, having been a meek cripple before his transformation. Traveling to a graveyard he comes across a man who believes himself to be a vampire and they argue, with Brock trying to convince him he is not really one, but a dull nobody. The cops come upon him and the "vampire" claims he was being attacked, leading to Brock being arrested as he turns back to human. As the story ends we see him returned to his man-bat form, but locked in a padded cell, hoping to get out. Sauri's art continues to be quite the highlight, and this story comes off in part as a more macabre take on Batman.

Second is "When I Was a Boy I Watched the Blood-Wolves!" by Augustine Funnel (story) and Jose Cardona (art). The story is hosted by Funnell. Our protagonist is a boy who hates all other humans and instead finds friendship with wolves, who share some of their food with him. When his parents punish him without dinner he doesn't care. Eventually he grows up and becomes a  killer, slaying a couple and getting arrested. The two officers holding him talk of how he considers himself a werewolf. However we soon find out that one of the officers is a werewolf instead, slaying his partner and freeing our protagonist. After all, they are like family. Some pretty good art by Cardona here and the way the story ends I could see a sequel.

Third is "Kill, Kill, Kill, and Kill Again" by Al Hewetson (story) and Ferran Sostres (art). This story is hosted by Ferran Sostres. Satan orders his archangels to cause havoc. We focus on one in particular, Simon Ingels who causes a man to murder his wife then promptly departs him to decry what he has done. We see Ingels cause various other horrible situations such as a cop striking a hippie, a milkman breaking into a house and other assorted things. We then learn of Ingels' life and how he was practically perfect. Heaven rejected him for being inhuman (due to being so perfect) so he became a servant of Satan and continues to cause havoc as the story ends. This was a very different type of story for Skywald, lacking a more traditional narrative but rather focusing on Ingels in his role as minion of Satan and the things he is causing to happen. Some well done art by Sostres as is typical for him. Also a great title!

Fourth is "The War of the Hell-Damned" by Al Hewetson (story) and Jesus Duran (art). This story is hosted by Jesus Duran. Professor Peter Cushman tells his students the tale of a skeleton that he owns. As a young man he was part of an occult group that would spend time in caves and search for monsters such as vampires. Spotting some tracks in the cave they go to see the local professor (also Peter's father), who doesn't believe in vampires or werewolves, offering up real life explanations for what they were inspired by. Peter and his friends later return to the cave where the professor is waiting, claiming he believes one of them, Rolf, to be a werewolf. Rolf confirms his suspicions and turns into a werewolf, but claims the professor to be a vampire! He pulls out a stake and mallet and tries to kill the professor, but Peter jumps him, revealing himself to be a vampire too and slays Rolf. The professor dies of his injuries though, and Peter carries on with his father's legacy. As we return to the present, he explains that he is a vampire, and he had killed all his fellow students that night. Duran's art here is quite strong (the page with Rolf the werewolf trying to stake the vampire professor is in particular a great one). Modern day Peter is modeled off of actor Peter Cushing (and obviously his name is based on him too).

Fifth is "The Cox-sackie-Axe Murder" by Ed Fedory (story) and John Agras (art). Ed Fedory hosts this story. Our story initially focuses on two lovers, however the woman's father, Silas Lowell does not want them together. Once the two of them depart, Silas has the man seized and slays him with an ax, but not before he proclaims a curse on Lowell and all that shall follow him. He rises from the grave as a monster, slaying Lowell. Lowell's daughter, Patience, hangs herself in grief. Years go by and every Lowell male dies before his 30th birthday. We turn to the present and focus on Ned Lowell, who is about to turn 30. The monster comes to slay him but upon hearing the name of Ned's daughter, Patience, thinks back to his lover, goes to her grave and dissolves. A pretty good story by Fedory, although some only so-so fart by Agras. Also the failure to name our protagonist is frustrating.

Sixth is "The Mummy Khafre: The Funeral" by Al Hewetson (story) and Cesar Lopez (art). This story is hosted by Al Hewetson. The titular Khafre is wife of the Pharoah Nefercheres, but her madness and mistreatment of her subjects causes her to be put ot death. She is mummified alive! We then head to the modern day where professor Peter Flinders and his assistant Tom find her tomb. Tom hopes to bring the still living Khafre to T.P. Barnum's circus and slays Peter in order to do so. He smuggles her out of Egypt, keeping her handcuffed and eventually finds Barnum, who doesn't buy her outright but pays him to stay with the circus using her as one of the attractions. Khafre is able to convince Tom that he is the reincarnation of Nefercheres and has him unwrap her head, revealing her to be as beautiful as she was when she was mummified. She then reveals her deception, strangles him and leaves. It looks like this will be the start of a new series starring Khafre.
Posted by Quiddity at 6:05 AM