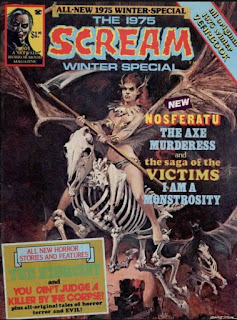 Today I'm featuring Scream issue 11, cover dated March 1975, which is also the final issue of the title. The cover is provided by Ballestar.

First is the latest story in the Nosferatu series, "I Kill to Live" by Al Hewetson (story) and Zesar Lopez (art). The latest person to tell their tale is Antie Mae Dippie. She explains how as a child, her father was a philanderer and her mother a drunk. One night he got so angry at her he killed her with an ax. Mae then killed him with it. She was found by the authorities and thrown in an asylum where she spent her life, growing up then growing old. At 65, she decides to escape, stowing away with a nurse whom she then strangles. She heads to the Australian outback where she finds a stray dog that accompanies her and eventually an old man living in a cabin. The old man has reported her though for the reward money, and when they arrive she is able to blow them up with dynamite then chops off the head of the old man. She flees with the dog, but when a snake attacks them, she kicks the dog in the way, which is bitten and killed in her place. She kills the snake with the rock, then puts the dog out of its misery. Devastated by what she did to her friend, she takes out an ax and chops herself in the head. Back in the present, Mae takes off her mask, revealing her head with a large gash in the middle. Nosferatu unfortunately stops before the end point, with a few characters left to go, but given that it was anthology based in nature it doesn't hurt as much as the fate of Saga of the Victims, seen later in this issue. This story features an introductory page that shows Nosferatu and the various characters who have told their stories throughout the series. As always, Zesar's art is lovely to look at.

Next is "You Can't Judge a Killer by the Corpse!" by Augustine Funnel (story) and Jose Cardona (art). This story takes place in London in the 19th century. Our protagonist, Paul, heads out to find work for the day only to find the body of his friend on the ground outside. Upset over the authority's inability to find his killer, he decides to investigate himself, but no one will speak to him. Paul eventually finds another body, and is told off by the tenant of a nearby apartment, 14, who says he may find the same happening to him if he's not careful. After speaking with his wife, Jen, he decides to confront the man and they head to see him. Paul quickly slays the man, not even giving him the ability to defend himself. But he soon finds out that its his wife who is the killer, as she has transformed into a werewolf, and kills him! What was a pretty decent story is ruined by a horrendous ending. If Jen was the killer the whole time and was fine with killing her husband, why wait until now?

Third is "Who Are they? The Breeders!" by Ed Fedory (story) and Luis Collado (art). A young woman walks down an alley where she is confronted by something unseen. Her shrunken, disfigured corpse is found by the authorities. The focus then shifts to her husband, who is quite mad that his wife, who had recently lost a lot of weight and become beautiful as a result, is dead. He blames the diet chocolates that she was eating and heads out, trying to find where they were made. He breaks into the drug store she had shopped from and knocks out the store keep, afterwards being able to find out where he ordered them from. He heads to a mansion where inside the old man owner talks to his unseen pets. Our protagonist breaks in and the old man claims to be guardian of the Breeders, which are upstairs. Our protagonist heads upstairs, finding the breeders to be tapeworms, which kill him. As the story ends, the old man plans to send them out via more "diet chocolates". This story seems inspired by an old EC story which essentially had the same premise; a businessman coming to a town with a solution for people to lose weight, but it being revealed that it was due to tapeworms.

Fourth is an adaption of Edgar Allen Poe's "The Raven" with adaption by Al Hewetson and art by Peter Cappiello. This is an adaption of arguably Poe's most famous tale, and is about a man mourning the death of his beloved Lenore. The titular raven appears, keeps saying the word "nevermore" and he gets upset enough that he ends up killing himself. Some dramatization and dialogue have been added by Hewetson.

We conclude with the fifth story in the "Saga of the Victims" series, "I Am a Proud Monstrosity" by Al Hewetson (story) and Jesus Suso Rego (art). This story begins with some thoughts from an unseen figure in a castle. We then return to our protagonists, Josey and Anne, who are in the hands of an African warlord. They are suddenly sucked through a portal and find themselves in a desert. They are first tormented by a sandstorm, then an attack from a snake, and then the ground collapses beneath them, causing them to fall into boiling water! After escaping from a tentacled being, they make their way to a cave, where Nazi storm troopers, now corpses, walk by. The cave they are in starts getting filled in from above with dirt, but they are able to crawl out of it and back outside. Anne starts shouting out that whoever is tormenting them has lost, but then a voice rings out that they have lost, but can rest easy as their torment is over. A flying craft then arrives, piloted by some monkeys! It brings them back to Manhattan, and Scollard Manse. Revealed to be the castle from the start of the story, it suddenly blasts off as if it was a rocket!

With the end of Skywald this series unfortunately ends with the final chapter yet to go. That said, the final chapter had been written and at least partially drawn, and would eventually see print years later. I recently had the opportunity to read it. In this final chapter, Josey and Anne meet an alien being that had been responsible for all the experiences they had gone through. The being constantly changes its form, to that of many of the horrors they had experienced throughout the series. It explains that it comes from another universe and was investigating ours, and put the two through all this to test them. The two of them continue to push back as they have throughout the series. The alien then destroys the Earth, grows giant in size, and crushes the two of them in its hands! As the story ends we find that the entire universe that Earth is in has been destroyed, but the other universe that the alien was from remains. Josey and Anne still exist in that universe as some sort of spiritual flotsam. The series ended in quite a bizarre fashion, in tune with the rest of the series. I will say the art for the final chapter is a lot lower of quality than the previous ones had been.

This is the penultimate issue of Skywald's horror line. With my next entry I'll be covering Psycho #24, Skywald's final issue! The end is just about here!