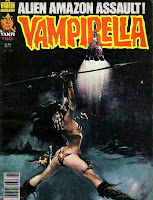 An excellent Esteban Maroto cover headlines this issue of Vampirella. First and last stories are quite poor, but the middle stuff is very good.

First is "Slaves of the Alien Amazon" by Pablo Marcos (art) and Bill Dubay (story). Vampi and Pantha are captured by a Lupae warrior (a race that fought with Pantha's race back on Drakulon). Pendragon meanwhile summons a demon to help rescue them, but is immediately overtaken by it. A rather poor story that will be concluded in the next issue. Marcos is a so-so artist, and a sore dissappointment compared with Vampi's two regulars at this point, Jose Gonzalez and Gonzalo Mayo.

Second is "Like Father, Like Son" by Leo Duranona (art) and Cary Bates (story). A successful man finds himself under attack by a mysterious assassin. It ends up the assassin is his own father, upset that he's taken his successes away from him. As the story continues it is revealed that the son is actually a clone of the father. The son, losing a big business deal starts growing paranoid himself of his son, who is also a clone of him.

Third is "Transference" by Jose Ortiz (art) and Bruce Jones (story). A superstar body builder finds himself losing muscle mass and weight, and the need to shave quickly goes away too. It soon becomes apparant that he is becoming a woman, a transformation that he finds very hard to cope with. Just about to kill himself, he finds hair growing on his face again, meaning the process has reversed itself. He excitedly goes to tell his girlfriend, only to find that she's turning into a man! Best story of the issue.

Fourth is "The Eternal Triangle" by Martin Salvador (art) and Cary Bates (story). A boy's parents are puzzled with his attitude, dismissing girls his own age and instead spending all his time with his grandmother. It ends up that he is actually controlled by the spirit of his grandfather, who died years before when his son wasn't able to get him snake poison antitode in time. He seeks revenge, but is killed by them. Before his death he raped his 'mother' however, meaning he'll return once again in another form.

The issue concludes with "John Donne and the Asteroid Pirates" by Pablo Marcos (art) and Chris Adames (story). A very poor story about the adventures and misadventures of John of the title, who sleeps with many women, battles monsters, and other assorted stuff.
Posted by Quiddity at 6:47 PM