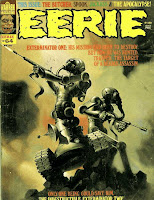 This issue's cover is about Exterminator One and is by Ken Kelly. Berni Wrightson provides a cousin Eerie intro on the inside front cover.

First is part three of the Night of the Jackass series, "The Children's Hour", with art by Jose Ortiz and story by Bruce Bezaire. A group of children take the Hyde (25) drug, causing another rampage. Bishop and Garson once again arrive to help stop them and meet Berthe Astruc, a chemist who seeks to create a cure for the drug. During the fighting Garson realizes that Bishop's nearly as bloodthirsty and willing to kill as the Jackassers and is helping more out of a desire to output his rage upon them than save others. As the story ends they decide to help Berthe find a cure.

Third is the second and final part of the Butcher, titled "Bye Bye Miss American Dream" by Richard Corben (art) and Bill Dubay (story). The mob war continues, with the youngest Gambino brother wiping out the leaders of both mobs and taking all the power for himself... only for the Butcher to arrive and kill him seconds later. Realizing he enjoys killing however, the Butcher retires.

"Daddy and the Pie" by Alex Toth (art) and Bill Dubay (story) is next. This story tells of an alien creature whose ship crashes to Earth. He is nursed back to health by a farm family, and the story is told from the perspective of the son in the family. Unfortunately the town becomes fearful of the alien and attack the father when he heads to town on his own. The alien saves him, but dies from his wounds. A terrific story which would eventually have a sequel made.

Last is part three of The Apocalypse series, "The Plague" with art by Jose Ortiz and story by Budd Lewis. This story surrounds two lovers in a apocalyptic setting where they are fleeing from a plague that has wiped everyone out. Unfortunately even they are unable to escape it and succumb to it, becoming a part of it themselves. Like last issue's "The Famine", an amazing story and amazing art.