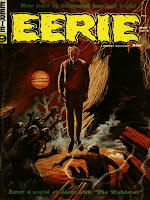 A very good early issue of Eerie, featuring a cover by Dan Adkins. This issue's frontis is "Eerie's Monster Gallery - The Cyclopses" by Roy Krenkel. Across the board this is a very good issue, with the first and last stories being the best.

First is "Fair Exchange" by Neal Adams (art) and Archie Goodwin (story). An old man whose soon to die plots to steal a young man's body when he discovers of a ridiculed doctor who has experimented on switching bodies. The switch is performed successfully and the old man now in his new body kills the doctor so he doesn't have to pay him. Only he soon discovers that the man whose body he stole is a vampire when he is destroyed by the sun's rays.

Second is "Rub the Lamp!" by Jerry Grandenetti (art) and Allan Jadro (story). A man purchases a magic lamp at an auction and wishes for riches, only to get it when his wife dies and he gets insurance money. He then wishes to live forever which happens when he becomes a vampire! He wishes to be reunited with his wife, and soon is when he trips on a wooden stake, killing himself.

Third is "Terror in the Tomb" by Rocco Mastroserio (art) and Goodwin (story). A pair of archeologists encounter a mummy guarding a pharoah's tomb which ends up coming alive. They destroy it, only to later find out that it was guarding them from the evil pharoah, whose still alive and kills them.

Fourth is "The Wanderer" by Dan Adkins (art) and Goodwin (story). A man appears in a hospital due to a heart attack and is saved by the doctors. The man tells of how he was in a car wreck and found himself wandering a strange realm where demons were after him. He demands to be let go but the doctor refuses, and the demons come for him, leaving only a skeleton behind.

Fifth is "Isle of the Beast!" by Steve Ditko (art) and Goodwin (story). Influenced by the well known story 'The Most Dangerous Game', this features a man shipwrecked on a deserted island with a madman who hunts human beings. The twist is that the man turns himself into a beast in order to heighten the intensity. Only this time the hunted ends up being a werewolf, who attacks his captor during the full moon.

Sixth is "An Occurence at Owl Creek Bridge!" by Bob Jenney (art) and Goodwin (story). This is an adaption of a story by Ambrose Bierce. A man is sentenced to be hanged, and it is done on a bridge. However, during the hanging the rope breaks and he falls into the river below. He swims away and returns home, to be reunited with his wife. Only it ends up that it all was a dream and he was hung after all. An adaption of this story was also used in the final season of the Twilight Zone, resulting in ripoff claims being made in later letter pages.

The issue wraps up with "Experiment in Fear!" by Eugene Colan (art) and Goodwin (story). A nazi concentration camp doctor experiments on jews by locking them in a gas chamber, studying their fear as he experiments with harmless gas that they only think is poisonous, killing them for real once he has sufficient data on the jew's fears. During one of his experiments however the captor escapes and imprisons him in the chamber where he is subjected to the same experiment. The leaders of the camp eventually rescue him but find that the data on his fears are exactly that of the jews. Rather than find the experiments worthless, they instead are convinced that he's a jew, and throws him in the concentration camp, where the captive jews are quite eager to get their hands on him...
Posted by Quiddity at 11:13 AM

Another excellent post. I would love to read your analysis/opinion of the "Night of the Jackass" series in Eerie (collected in Eerie #115?). I am also curious to read your top ten favorites from Creepy, Eerie, and Vampirella. Do you also like the Skywald line? Keep up the great work.

Regarding Night of the Jackass, I covered the first part with Eerie #60, the next three parts (which are in issues 63-5) aren't too far off. :P Its a terrific series, which I'll probably rate as a whole after the final part in issue 65.

Are you looking for my top 10 favorite stories, or favorite issues? :P I'm sure I can put together a favorite stories list pretty easily. Would be interested in hearing yours too.

To date I haven't really gotten into Skywald yet as I've been focusing on completing my Warren collection (I'd say I own probably 95% of the non-reprint issues of the three horror titles and 1984 at this point). I probably will look into it someday although I have noted that the issues do tend to be a lot more expensive than the Warrens on ebay.

Thanks for the comments! :)