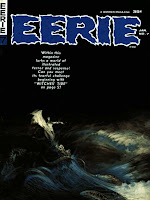 This issue's cover is by Frank Frazetta. Its rather different than his usual fare, dominated by a dark sky and dark sea with a woman in white beckoning whatever is in the sea. The frontis for this issue is "Eerie's Monster Gallery No 6: The Hydra" by Gray Morrow.

First story is "Witch's Tide" by Eugene Colan (art) and Archie Goodwin (story). The story is about a group of sea beasts that are attacking people in a small town. The townfolks think the daughter of an admitted witch is luring the beasts to the town, so they kill her and burn her corpse. But it ends up that she was actually attemping to keep the beasts away from the town, and with her dead, the beasts are quickly able to overrun the town. A great story to start off the issue with.

Next is "It That Lurks!" by Dan Adkins (art) and Archie Goodwin (story). A pair of men encounter a dinosaur lurking in quicksand in the deep jungle. They shoot it with tranquilizer darts only for it to submerge under the quicksand. One of the men, seeking glory heads in the quicksand after it and is killed. The other man is about to depart when he sees his wife in the quicksand and also heads in, to his death. It ends up neither the dinosaur or the man's wife were ever truly there, but actually were generated as a trap (that which the victim wanted the most) by the quicksand. Yet another terrific story here.

Third is "Hitchhike Horror!" by Hector Castellon (art) and Goodwin (story). This is Castellon's Warren debut. His art, as usual is just way too ugly and has too many lines if you ask me. Anyway, this story is about a man who picks up a hitchhiker and soon after hears news on the radio about a maniac being loose. It seems as if the hitchhiker is the maniac, but in actuality he is after the driver, who is the real maniac. It ends up that the hitchhiker is a ghost of one of the driver's past victims and kills him by burying him alive.

Fourth is "The Defense Rests!" by Johnny Craig (story & art). A terrifically drawn and written story, featuring no dialogue at all. It is about a young lawyer who goes after the same woman as the very powerful mayor. When the town maniac kills the girl, the mayor blames it all on the lawyer and puts him on trial, where he stacks the jury with his allies and declares him guilty. The lawyer breaks loose and captures them all and unleashes the maniac on them, who was, like him, framed years before.

Fifth is "Fly!" by Steve Ditko (art) and Goodwin (story). This story is about a man covered in bandages who has had surgery to change his face. Only he keeps being bothered by a fly and falls out a window to his death. It ends up that the fly was attached to his head bandages near his ears which is why it bothered him so much.

Sixth is "The Quest!" by Donald Norman (art) and Goodwin (story). A powerful duke seeks eternal life, but every attempt at it fails. His advisor, an old man, tells him that he'll be able to give him eternal life if he will do good things for the town. The duke agrees so the old advisor brings him to a place occupied by vampires, who promptly turn him into one of their own.

The issue concludes with "Cry Fear Cry Phantom" by Jerry Grandenetti (art) and Archie Goodwin (story). A man and his fiance go to his home, a large mysterious looking house, where his uncle lives with him. She repeatedly has visions of an odd looking woman with an axe, and suspects the uncle is up to something, particularly when she sees him burying that woman! It ends up however that the fiance is the true maniac, and chops her up with an axe.
Posted by Quiddity at 7:47 PM