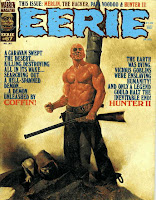 Eerie 66 is a self contained issue featuring El Cid. I'm going to save that issue for a later date and will head right into Eerie's next regular issue, 67.

Coffin gets his second cover on this issue for his second appearance, done by Sanjulian. Berni Wrightson contributes the frontis, starring Cousin Eerie. A Budd Lewis heavy issue, with four stories.

First is Coffin in "Death's Dark Curse" by Jose Ortiz (art) and Budd Lewis (story). Coffin sees a caravan crossing the desert but it ignores his pleases for help and heads off without him. He comes across a town completely empty, apparantely visited by 'The Caravan of Death', and heads off with some supplies. He soon finds the corpses of all town's people in the desert. He comes across the caravan, occupied by caped priests who have a woman captive. They tell Coffin that the woman is actually a demon they mistakenly summoned and have taken years to capture. Coffin ignores them and escapes with her. But it soon becomes aware that she is a demon, in fact the Devil himself, who is unleashed upon the world because of Coffin's meddling. A terrific follow up to the original Coffin story (from all the way back in issue 61), so far this series has been a blast. Now if they can just keep it on a reasonable schedule...

Next is "Hunter II" by Paul Neary (art) and Budd Lewis (story). With Hunter being one of Eerie's most popular series ever, it was obvious that a sequel would eventually appear. This story takes place 20 years after Hunter's death. Karas is the star, who was a boy saved by Hunter in the original storyline. Karas lives with Mandragora, a powerful wizard who tells him that the world is soon going to end. He hopes to stop this by halting the Earth's rotation for a minute, which will remove it from the time shell that Earth is fated to be destroyed if it stays in. Mandadragora tells Karas of Yaust, an evil wizard who controls the world's demons, now called Goblins. Karas dons Hunter's helmet and heads out to save the Earth. Hunter II goes in somewhat a different direction than the original series but actually has a better storyline if you ask me.

Third is the finale of the Hacker, "The Hacker's Last Stand!" by Alex Toth (art) and Steve Skeates (story). This was Skeates's final Warren story. He was a very strong writer for the majority of his stories (his Mummy finale certainly was a big dissappointment), so he certainly was missed after this point. Another ten years have passed but the Hacker murders have started occuring again. Smythe heads after who he thinks is the Hacker, but it is only a hired hand and the true Hacker arrives and kills them both, ending the series. A downbeat finale to a fairly good series.

Fourth is Papa Voodoo in "The Man Named Gold". Papa Voodoo is none other than Crackermeyer, from the Spook series. With that series stretching a tad far past its prime, it certainly is dissappointing to see yet another related story here, although luckily things finally ended for good after this story. Art is by Leopold Sanchez and story is by Budd Lewis, the Spook series regulars. This story features the aged Crackermeyer telling children about a black cowboy whose wife and kids are captured by Apache warriors. The cowboy, named Gold, heads after them, but it takes years and when he finally finds his wife and children, she no longer remembers him and kills herself after he kills her Apache husband. Gold takes back his kids, but dies at the hands of the Apache years later.

The issue wraps up with Merlin in "The Kingmaker" with art by Esteban Maroto and story by Budd Lewis. Terrific art by Lewis, but not all that interesting a story. It stars Merlin, in a story that takes place before King Arthur's birth. In fact this story heavily features Arthur's parents, King Uther and Ygraine, who are assisted by Merlin and his assistant Snivel.
Posted by Quiddity at 2:08 PM