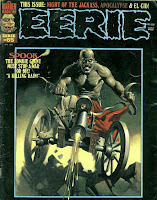 A number of series come to an end in this issue. The cover is by Ken Kelly, featuring the Spook. Berni Wrightson contributes a one page intro on the front inside cover.

First is the final entry in the Night of the Jackass series, "Endstorm". Art is by Jose Ortiz and story is by Bruce Bezaire. Bishop and Garson head to Berthe's lab where she hopes to finish her treatment for the Jackassers. Bishop reads Berthe's notes and realizes that she was the one responsible for creating the Hyde drug. Berthe forces him out, but Garson gets upset and leaves as well, only to find that Bishop has taken the drug and become a jackasser. Bishop goes out of control and attacks them, but Berthe is able to use her antidote which works, turning him back to normal. The series ends here on an optimistic note, with our heroes now having a way to cure the jackassers. Overall this is certainly one of Eerie's best series ever, with a unique and interesting storyline and great Ortiz art. While the series certainly had an open ended conclusion, Bezaire avoided having it go on further and let it end on a high note.

Second is "The Hacker is Back", marking the return of the Hacker for the first time since issue 57. Alex Toth takes over on the art from Tom Sutton (who by this time had departed Warren), and Steve Skeates handles the writing. Ten years have passed but the Hacker has returned and started killing again Our hero, Smythe eventually finds out that the man they had locked up years before and let go is still around, and captures him. It ends up he has four collaborators which allowed him to be let go before. Smythe breaks free of his bonds and kills all five of them. Does this solve the Hacker killings once and for all? Apparantely not as there's still one more entry in this series.

Third is "Coming Soon... A Killing Rain!", the Spook's final appearance. Art is by Leopold Sanchez and story is by Budd Lewis. The story moves ahead to the Civil War, with Crackermeyer telling the army from the north that he doesn't want them fighting on behalf of black people. He and the Spook try to stop a battle between Northern and Southern soldiers but fail to and during the battle the Spook is killed, this time for real. It is revealed that the Spook actually was Crackermeyer's younger brother. Overall I wasn't all that impressed with this series, with Crackermeyer becoming much more of the star of the series over the more interesting Spook once Budd Lewis took the writing over. A sequel story, "Papa Voodoo" would appear in issue 67.

Fourth is "El Cid and the Troll", a new series featuring the legendary Spanish character El Cid. Art is by Gonzalo Mayo and story is by Budd Lewis. A troll has been appearing by a bridge, capturing women and holding them for ransom, but never actually giving them back. El Cid is told the story and heads there with a man whose family was taken by the troll. They set up a trap by having the man dress up as a woman. It ends up that the troll was nothing more than an old man, who dies when they attack him upon his arrival. Mayo's art is extremely good here, and throughout this series. El Cid would have the entire book dedicated to him in the next issue.

The issue concludes with the final part of the Apocalypse series, "The Death" by Jose Ortiz (art) and Budd Lewis (story). Death summons the other three horsemen, War, Famine and Plague to see which one is the most dangerous to mankind. All three head out and claim numerous souls for him but he is unable to decide among them. The spectral spirits of children arrive however, ones that the four horsemen are unable to claim. The series concludes, saying that as long as there is children, there is hope. While not as strong as the two previous stories, this is still a good story and worthy conclusion to an amazing series.

Unfortunately with Night of the Jackass and Apocalypse ending, Eerie's peak period comes to an end with this issue. Not that the magazine doesn't stay good for a while, but the stretch from around issue 48 through 65 is filled with amazing stuff and it never would get this good again.
Posted by Quiddity at 6:47 PM