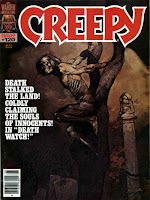 First story is "Deathwatch" by Leo Duranona (art) and Roger McKenzie (story). An old woman keeps alive by refusing Death each time the Grim Reaper comes for her. She befriends a sick young boy in the hospital and finds that he's soon going to die. To save the boy's life, she finally offers herself to the Reaper in order to take the boy's place. A terrific story to start the issue, the best stuff here.

Next is "Hell house" by Jesus Blasco (art, miscredited to Jaime Brocal) and Jim Stenstrum (story, credited to Alabaster Redzone). This story features a hippie and three beautiful women with him who sneak into a seemingly deserted house which is actually occupied by a small impish monster that rapes and kills them all.

Third is "Black Rainbow" by Rueben Yandoc (art, his Warren debut) and Budd Lewis (story). Men in a submarine find a mechanical device deep below the ocean. Soon after finding it a black ring surrounds the Earth and starts blasting the surface with fire, killing all of humanity. The last survivors, who escaped by being out in space think that an alien race planted the device to destroy humanity once they became too advanced.

Fourth is "One Mind, Closed for Alterations!" by Jess Jodloman (art) and Gerry Boudreau (story). The mafia is suspicious of a senator running for president, so they plot to manipulate a mentally unstable man to get him to kill them through subliminal messages. It works and the senator is killed, and the assassin is killed immediately afterwards, making it looks like he was on his own. The mob boss soon is manipulated in the same way to kill himself however by the man who created the subliminal messages. This man then kills himself over fear that it could happen to him as well.

Fifth is "A Taste for Heroes" by Carmine Infantino & Pablo Marcos (art) and Gerry Boudreau (story). This story is about a kayak race on a river rumored to be where Ulysses blinded a cyclops. Along the river are numerous traps that kill all of the kayakers except one, who believes that the cyclops is still out there.

"Winterbeast" by Val Mayerik (art) and Budd Lewis (story) is next. This story is told from the perspective of a wolf being chased by french hunters. While the wolf is shot by them a giant indian woman appears and saves him, freezing the men.

Last is "Black Snow" by Herb Arnold (art, his Creepy debut) and Jeff Rovin (story). This story surrounds an author working on a book who sees black snow falling from the sky. Thinking its the apocalypse, he goes out to see if a lady friend is okay but finds her dead. With her dog he wanders around looking to see if anyone else is around.

Overall a so-so issue. No real terrible stories, but aside from the first one, nothing that great either. The art is for the most part quite good here though.
Posted by Quiddity at 6:41 PM