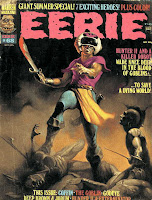 A great issue of Eerie, one of its best issues ever. The cover is by Ken Kelly, featuring Hunter II.

First is "Half Walk", part of the Coffin serial. Art is by Jose Ortiz and story is by Budd Lewis. Coffin is found by a traveling caravan run by Halfwalk, a quadruple amputee who sells freaks to various circuses. Coffin is presented as the biggest freak of all, but gets his revenge on Halfwalk, who has the ability to fight even without limbs. Coffin sets him on fire, killing him, and leaves, still hoping for some way to end his own life.

Next is "Goblin", part 2 in the Hunter II series. Art is by Paul Neary and story is by Budd Lewis. Karas fights some Goblins, having trouble, but is helped by an Exterminator robot who joins him in his quest. At the end of the story however the Exterminator robot appears to be 'killed'. With Neary having done the art for the Exterminator One series, it was a natural choice to bring this character into this series.

Third is "Godeye", with art by Leopold Sanchez and story by once again, Budd Lewis. An excellent, very funny stand alone story. A draft dodger on his way to Canada meets a strange long haired man who transfers him to another dimension when he touches them. There, the draft dodger is hailed as a hero, and called 'Godeye' based on a misunderstanding of something he says. While it seems like the good life at first, Godeye discovers he has to battle a cyclops that has been eating people in the village. While initially scared, Godeye manages to outsmart the cyclops and defeat him. All the various funny things in this story are hard to summarize here, but this story is definately a blast to read and was rated in the top 25 stories ever in the Warren Companion.

This issue's color story is fourth, "The Muck Monster" by Berni Wrightson (story & art). Wrightson's version of the Frankentein monster, this is about a scientist who tries to bring a corpse to lie, but the corpse has no desire to live. The scientist in an angry fit destroys the monster in a vat of acid and dumps the remains in the drain. The remains drip down the hill and once reaching a body comes to life. The monster returns to the scientist's lab, driving him crazy, then sits down on the hill, for good. Really good art and color in this story.

The issue concludes with "Deep Brown and Jorum" by Esteban Maroto (art) and Jim Stenstrum (story). This story features two rogues, Jorum and Deep Brown who meet when Jorum purchases Deep Brown. The two go on many adventures, which are summarized across five pages. At the end of the story Deep Brown meets his end at the hands of a giant spider. An okay story with an interesting narrative style.
Posted by Quiddity at 4:31 PM