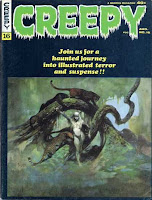 One of Creepy's last good issues before collapsing into a rut for much of the late 1960s, this issue has a Frank Frazetta cover which is miscredited inside to Gray Morrow. The frontis for this issue is Creepy's Loathsome Lore by Gil Kane.

First story is "A Curse of Claws!" by Neal Adams (art) and Archie Goodwin (story). This story features a man in the jungle who encounters a woman who says she is Lillith, Goddess of Cats. The man fights her and kills her, but turns into a panther like creature and ends up scratching himself to death.

Next is "Frozen Fear!" by Reed Crandall (art) and Archie Goodwin (story). A team of explorers find a frozen warrior. One of the explorers is after the wife of another. It ends up that he is the descendent of someone known to the frozen warrior, who comes alive and kills him.

Third is "Angel of Doom!" by Jeff Jones (art) and Goodwin (story). This story is Jeff Jones's first Warren work. This is another story featuring Thane the Barbarian, who I have previously discussed in my coverage of issue 27. In this story Thane is part of a tribe that continously makes sacrifices to a monster. When his lover is killed, Thane heads out, ignoring the tribe's warnings and battles the monster, a giant insect creature. He defeats the creature, but the tribe decides to continue making sacrifices anyway, so Thane leaves. The tribe is soon plagued by the monster's children and are all killed after Thane leaves.

Fourth is "The Frankenstein Tradition!" by Rocco Mastroserio (art) and Goodwin (story). A doctor blackmails a top student of his to join him in his quest to bring Frankenstein's work to real life when he catches him cheating. The doctor has the student kill numerous people so he can use the fresh corpses to work on bringing his dead wife to death. He eventually succeeds, but the student rebels and the house is burned down. At the end it is revealed that the student ends up being known as Jack the Ripper due to all of the murders he committed.

Fifth is "There Was An Old Lady" by Sal Trapani (art) and the team of Daniel Bubacz & Archie Goodwin (story). A poor story with poor art in what was Trapani's Warren debut. A man decides to rob from an old woman who is rumored to be a witch. He tricks her into letting him in her house then attacks her, demanding her money. But she gets him to drink some poisoned wine which enables her to turn the tables on him, revealing herself to truly be a witch.

Sixth is "Haunted Castle!" by Donald Norman (art) and Goodwin (story). This story surrounds a leader of a castle who is haunted by various ghosts, led by the woman who used to run it. Eventually he is chased out of the castle and hit... by a car! It ends up that he was in modern times, and was running around as a corpse, not knowing that he was dead.

The issue concludes with "The Sands That Change!" by Steve Ditko (art) and the team of Clark Dimond & Terry Bisson (story). A dissappointing finish to this issue, it is about a comic book artist in the desert with his wife who draws a monster on a piece of paper, which comes to life! Whatever he draws on the paper comes to life. He climbs a rock that was drawn on the paper for safety, then burns the paper, hoping to burn the monster. But that ends up burning him too since he's on the rock. Even Ditko's artwork isn't as good as usual here.

Even though this issue is from Creepy's original golden age, it is for the most part a rather poor issue, with a number of mediocre stories and the art not as good as usual.
Posted by Quiddity at 5:01 PM