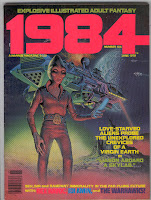 The cover of this issue is by Jim Laurier, featuring an alien creature.

"The Warhawks" is up first, by Jose Ortiz (art) and Bill Dubay (story). This story features an interview with the leader of the Warhawks, a group of killers and mercenaries who go on various adventures.

Second is the last part in the Idi Amin saga, "The Final Days of Idi Amin!" by Esteban Maroto (art) and Bill Dubay (story). Dogmeat and Idi arrive in America. After making their way to the ground they end up fighting some mutants who imprison them underground. There they meet a crazy guy with multiple personalities, Genghis Khan and Napolean. Dogmeat finally has enough and decides to leave them, ending our story. Not all that good an ending for a series that had insanely beautiful art but not all that great a story.

"Liason Aboard a Skylab" is third, by Alex Nino (art) and Jeff Rovin (story). This story features a newlywed alien couple whose ship approaches Earth. The story also surrounds the scientists and technicians on the Earth researching what is going on. Not too good a story with usual good Nino art though.

Next is the newest segment of "Mutant World" by Richard Corben (art) and Jan Strnad (story). This segment of the story features Dimento being let into the military facility where his lady friend has been taken by a pair of foolish guards. Meanwhile the priest from the second segment returns and makes his way through the facility. There it is revealed by a pair of scientists that he and Dimento are actually clones created in the facility.

"Twilight's End!", a new series is next. It is drawn by Rudy Nebres and written by Jim Stenstrum (under his pseudonym Alabaster Redzone). It features an astronaut being sent down to investigate a primative planet. He is accompanied by a small machine that helps keep him in line. While there he finds a primitive woman who accompanies him. They are unable to understand each other, but she is more intelligent than she seems and appears to dislike his company.

Last is another segment in the Rex Havoc saga, "She Who-Must-Be-Okay!" by Abel Laxamana (art) and Jim Stenstrum (story). The 'She' of the story is a woman in ancient Egypt who caught her lover Kallikrates cheating on her. She killed him in a rage and was banished. She found the kingdom of Kor where she became their leader and lived for thousands of years. In the present day a man enlists the Asskickers of the Fantastic believing that he is Kallikrates's descendent. They head to Kor and meet 'She', who instead believes that Rex is Kallikrates's descendent. She becomes enraged but our heroes end up beating her by getting lucky when her power of immortality suddenly goes away and she perishes. A long story, but probably best of the issue.
Posted by Quiddity at 4:51 PM