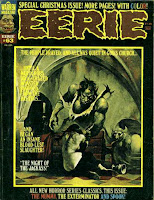 Another terrific issue of Eerie from the peak period of that magazine. The cover, featuring 'Night of the Jackass' is by Sanjulian. The back cover of this issue, which would later be used for Creepy 104, is by Ken Kelly and features Exterminator One. Berni Wrightson provides an intro from Cousin Eerie.

First story is the second part in the 'Night of the Jackass' series, "Storm Before the Calm!" by Jose Ortiz (art) and Bruce Bezaire (story). Garson and Bishop meet up once again at a church that has been taken over by the Jackassers. While no one else wants to go inside and help the victims, Garson and Bishop do so and with the help of people inside are able to defeat all the monsters.

Next is an adaption of Nathanial Hawthorne's "Hollow of the Three Hills!", with art by Esteban Maroto and adaption by Rich Margopoulos. Absolutely amazing artwork from Maroto in this story. A young woman visits a witch, who shows her two depressed looking old people, a crazy man in an institution and a funeral. It ends up that they were all connected to her, the old people were her parents, upset over her leaving them, the crazy guy was her husband, who went crazy after she had an affair, and the funeral was for her child, who died of the pox after she ran off. The trauma from the visions causes the young woman to become comatose.

Third is the latest segment in 'The Spook' series, titled "Stumpful of Granddaddies!" by Leopold Sanchez (art) and Budd Lewis (story). After the death of a wealthy white woman, Crackermeyer is accused of the murder and brought to trial. The Spook helps him out by bringing back her dead husband, then eventually her to clear him of the crime.

This issue's color story is next, "Exterminator One", the second part in this series. The art is by Paul Neary and story is by Bill Dubay. The Exterminator works on his latest case, where he has to kill two men and get one of the victims blamed for the murder of the other. He is able to do this successfully, but during the assassination another hit man, Slaughter, who was friends with one of the killed men spots the Exterminator, blowing his cover. Slaughter looks exactly like the main character from the story "Love Strip" which was published in Vampirella 44. Although that issue came out after this one, the story was originally published in Europe prior to that date making me wonder if Neary swiped the character from Luis Garcia's artwork on that story.

Fifth is "Insanity", which finally brings The Mummy series to an end. Art is by Joaquin Blazquez and story is by Steve Skeates. Rather than wrap up the story of Jerome Curry, this story jumps ahead almost a century and features a young woman who becomes obsessed with reviving the mummy because she thinks she is the reincarnation of its lover. She murders a woman who holds the amulet that can revive the mummy, then revives it. The mummy doesn't want to be alive however and strangles herself then shoots himself so he can be dead forever. A very dissappointing conclusion to this series as we never really find out what happened to Jerome Curry. The previous story indicated that they were going to conclude the story in some way but this was hardly a worthy conclusion. This was one of Skeates's last stories for Warren, perhaps he just wanted to get it over with in any way possible. At the very least, Blazquez's art is quite good.

We wrap up the issue with "The Plague" part two in the 'Apocalypse' series. Art is by Jose Ortiz and story is by Budd Lewis. This story features what is probably Ortiz's best artwork with Warren. Three friends in France, Louis, Armand and Gaston head off to war to fight Germany. The war drags on and ends in defeat for France. As they head back during the winter the three friends fall hopelessly behind their comrades and stay behind to stay with Armand, who has broken his leg. Louie and Gaston search for food to no avail. Louie soon realizes that Gaston is sneaking out each night. He initially thinks that he is foolishly searching for food that isn't there each night, but after Armand's death he realizes the truth, that Gaston has found food in a nearby abandoned barn and has hid it from them. Louie responds by killing Gaston and eating him, leaving some parts behind to eat on the long way back to France.
Posted by Quiddity at 7:02 PM