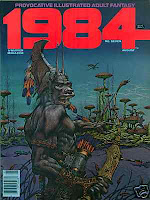 This issue features a cover by Patrick Woodroffe of a beastly looking alien creature.

First is "Teleport: 2010" by Alex Nino (art) and Budd Lewis (story). This story is about a madman who hijacks a teleportation shuttle used to transport thousands of people a day. He kills numerous people, demanding the captain transport him to a place out of government jurisdiction. They fight, more people die, and eventually the captain transports him and everyone else, who he hopes to use as hostages... into the middle of space by accident, killing them all.

Second is "Freeze a Jolly Good Fellow" by Jose Ortiz (art) and Budd Lewis (story). This story surrounds a rich man who has himself and girlfriend placed into suspended animation in space so he can outlive the war, famine and other things plauging the world. They awaken over 120,000 years later only to get sucked out into space to their deaths when they open an elevator door.

Third is "Kaiser Warduke and the Indespensable Jasper Gemslong!" by Jim Janes & Alfredo Alcala (art) and Rich Margopoulos (story). This story is about a mutant man, Kaiser Warduke with a talking gem on his head who saves a woman named Nymph from a monster that wants Kaiser to leave the planet. They encounter another alien which Kaiser kills as well. Only it ends up that the aliens wanted to save him, as Nymph sucks all his power out of him.

Fourth is the latest segment in "Mutant World" by Richard Corben (art) and Jan Strnad (story). The priest mutant goes on a rampage but is killed by one of the lab technicians. The head doctor decides to shut down their entire project. Dimento meanwhile escapes from the lab with the help of the human soldier he met before. He gets upset seeing him and the woman he has a crush on together, but the man simply knocks him out when he objects. One more story in this series which we'll see in the next episode.

Fifth is the second segment in the "Twilight's End" series by Rudy Nebres (art) and Jim Stenstrum (story, credited as Alabaster Redzone). Our hero Zev discovers the woman he met, Rena can talk and she tells him that she's part of the enlightened tribe, who is fighting the throwback tribe. They head to a colony of enlighteneds, where Zev is suspected as a devil because of his Snitch Scope companion. He is imprisoned and attacked by a lizard like creature, but manages to escape.

Sixth is the premiere of a new series, "Ghita of Alizarr" by Frank Thorne (story & art). This series would appear in most of the remaining issues of 1984/1994. Ghita is a woman who lives in the city of Alizar, which is soon to be under attack by trolls. King of Alizarr, Khalia is severly wounded and asks Ghita's fake wizard friend Thenef to bring back to life Khan Dagon, a great warrior. Using a gem they do so, but Khan goes crazy, killing Khalia and tries to rape Ghita. Luckily Thenef helps Ghita kill him.

Last is "Zincor and the Fempire" by Alex Nino (art) and Gerry Boudreau (story). This story takes place in the future where women have abandoned men, and are seeking out and destroying any they can. Our hero Zincor along with some of his fellow men spots a Fempire warship which lands near them and attack, spawning a battle between them and the women. Zincor rapes one of the women, Marta, which causes her to betray her allies and join the men. The women's battleship is destroyed by her and only one woman is left. Marta spots her with Zincor however, killing them both, leaving her as the only person left.
Posted by Quiddity at 5:12 PM