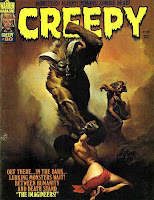 A very good issue of Creepy, one of the first ones I ever read. The cover featuring a couple of demon like creatures and their victim is by Ken Kelly.

Up first is "Benjamin Jones and the Imagineers" by Luis Bermejo (art) and Budd Lewis (story) about a boy whose toy soldiers can summon monsters. Naturally his mother doesn't believe him, until she is confronted by one of them.

Next is "Second Genesis" by Esteban Maroto (art) and Gerry Boudreau (story). In the distant future a man who grew up not knowing who his parents were seeks to find out by traveling back in time. To make a long story short, it ends up that he was his own father. A pretty good story in my eyes that doesn't seem to be that popular. Maroto's art is nowhere close to its usual beauty though.

Third is "The Fable of Bald Sheba and Montebank the Rouge!" by Jose Bea (art) and Bill Dubay (story). The story features a man ignoring warnings about visting the grave of the witch Sheba, and when he arrives at the grave he ends up not being able to escape because she grabs him. Or does she? It ends up that he had merely gotten stuck due to planting his sword in her grave which caught to his cape. Nonetheless, he passes away of a heart attack due to it. This was Jose Bea's first story from Creepy in approximately 2 years, and unfortunately would be his last story in Creepy.

Fourth is "Proof Positive" by Alex Toth (story & art). Taking place in the late 1800s, the story features a man who invents a camera and goes to see patent attorneys who try to steal his idea. He takes revenge by poisoning them. An explosion ends up going in his darkroom however, killing him as well. As always, Toth's art is terrific, and is printed sideways in this story.

Fifth is "Ain't It Just Like the Night" by Martin Salvador (art) and Doug Moench (story). The story features a trench coated man with his face hidden from us by shadows capturing various people and suspending them in glass containers. He reveals that he is here to save humanity, which will soon face a nuclear holocost, by using suspended animation to protect a select number of people who can later repopulate the world. The ending reveals his bug-like face. Really enjoyed this story, with a better than usual job from Salvador and pretty good writing by Moench.

"The Axe-Man Cometh" is next, with art by Jorge Galvez (in his final Warren story) and story by Gerry Boudreau & Carl Wessler. An axe murderer escapes from jail with the help of his sister and quickly returns to his axe murdering ways. His wife brings him home to meet his husband and then kills her husband, planning to blame it on her brother. Yet he discovers her plans and ends up killing her too. A very abrupt ending, but a pretty good story.

Last is "The Last Chronicle" by Jose Ortiz (art) and Budd Lewis (story), a sequel to the earlier story, "The Escape Chronicle from Creepy #75. The first story dealt with a man, Charlie, seeking escape from a Big Brother-esque future who befriendeded another man Bernie. Charlie was able to escape in a hot air balloon, but Bernie was left behind. This story features Bernie pining for his old friend and wondering what wonders he is experiencing. Eventually Charlie returns and takes him away with him. The first story (which I'll eventually cover when I get to that issue) was terrific, this one just isn't that great, as it seems little more than a postscript to the first, with a happy ending that the original story avoided.

Overall a terrific issue!
Posted by Quiddity at 6:25 PM