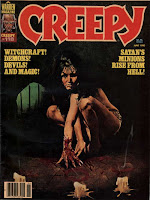 A fairly good issue for issue for this era of Warren, where things were quickly collapsing. The cover's a good one by Enrich.

Up first is "Nursery School" by Leo Duranona (art) and Bob Toomey (story, which was a rewrite of Duranona's original story). The story is about a man attached to a bunch of machines that is instructed by his computer 'mother' to fire upon approaching vehicles. Eventually real humans come across him, but he's so far under the machine's control that he fires upon them as well.

Next up is "Epitaph" by Joaquin Blazquez (art) and Len Wein (story). Blazquez was kind of a poor man's Luis Garcia, with a very detailed art style, although his characters were frequently in odd positions. Still, his art generally was pretty good. This was his first story for Warren in a number of years and he would vanish again for good after this one. The story's about a man who kills his wife due to infidelity. Visiting the graveyard however, she and other corpses come to life and kill him.

Third is "The Curse of the Binder Woods" by Isidro Mones (art) and Mark Laidlaw (story). A man finds that his sister is suddenly pregnant, and a doctor who is actually a monster arrives, saying that a demon baby is gonna be born. In the end however, the baby ends up being born from the man himself. Definately an odd story.

The issue's best story is "Junior Was a Momma's Boy" with art by Carmine Infantino & Jorge Benuy and story by Gerry Boudreau. A young lady, Ida marries a man, Stuart and finds that he's obsessed with his mother, who never speaks. After the mother's death, Ida finds herself rapidly aging, yet oddly enough Stuart likes her even more, and eventually starts calling her mother. She eventually discovers that he's done this to many other women as well using pills discovered by his father. Benuy does a good job inking Infantino's art in his only Warren story, aside from a part of the story that Ida talks about looking old when she looks as young as she did at the start of the story.

Last is "Process of Elimination" by Pablo Marcos & Val Mayerik (art) and Bob Toomey (story). A man finds out that his father is a sorceror and has dissappeared. Eventually his mother vanishes as well. The man is forced to confront Satan himself and pick his transformed parents out of a crowd. He succeeds and leaves hell with his father, leaving his mother behind since she was behind the trouble in the first place.
Posted by Quiddity at 6:00 PM