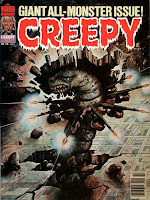 This issue of Creepy is a monsters special. The cover, by Patrick Woodruff, features a bizarre multi-armed worm sporting machine guns. Quite the odd looking cover.

First story is "Pantomine at Sea" by Buz Vaultz (art) and Cary Bates (story). A stuntman wearing a seamonster costume is pursued underwater by multiple hunters who appear to think that he's a real monster. He's captured and put in a tank, so he removes his mask to prove that he's a person. Only they don't let him out, and remove their own masks, revealing that they are aliens! They depart in a spaceship, taking him back to their own planet.

The issue's best story is "Almost Shangri-la" by Leo Duranona (art) and Bruce Jones (story). The story is about two climbers in the himalayas that get lost in the snowy wilderness and come across a paradise. One of the men freaks out and runs off terrified, and turns into a monster.

"The Thing in the Haunted Forest is third, with art and story by Abel Laxamana. The story features a man who kills an old man with an axe and takes all his money. He tries to bury the money in the forest and mark the location by chopping down a tree. Upon chopping at the tree, a spirit comes out and says that she has been cursed to live forever in the tree and that he'll be cursed with eternal life if he chops it down. He goes ahead and does that, releasing her, but the tree falls on him, trapping him under it forever.

"Killer Claw" by Walt Simonson & Klaus Jansen (art) and Mark Lasky (story) features a giant lobster that kills a few people and is attacked, only to release thousands of babies upon its death.

"Night Eyes" with art by Alfredo Alcala and story by Bruce Jones features a man who goes to Africa to head the creation of a railroad in order to earn the respect of his prospective father in law. His team is terrorized by a creature that they are unable to catch. At the end of the story our protagonist is able to escape alive after being concealed in a giant crate. Didn't get the ending of this one.

Last is "Fair Prey" by Isidro Mones (art) and Bruce Jones (story). A derelict ship is spotted, featuring the corpses of multiple people, and a single living person, a woman who tells the story about how their research project on an island was interrupted by giant mosquitoes. At the end of the story, they return.
Posted by Quiddity at 9:19 PM