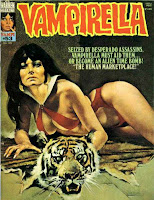 Here's an issue of Vampirella from early in the Louise Jones era. The cover features who else, Vampirella, reclining on a tiger skin.

First up is "The Human Marketplace" by Jose Gonzalez (art) and Gerry Boudreau (story). Vampi is caught with her forged passport on the US border and agrees to work undercover in order to get off the hook. She is used to go undercover to thwart Algernon Silver, a man who plans to sell women to various world leaders and use them to kill them all at once. As usual, Vampi is able to save the day while Silver's own men also end up 'screwing' up his plans. Pretty good story with gorgeous art by Gonzalez.

Second is "Opium is the Religion of the People" by Auraleon (art) and Gerry Boudreau (story), featuring a man who goes after the drug dealer who was partially responsible for his sister's death. The man eventually tracks down the drug dealer, known as "the snowman" and with the help of his sister's former lover is able to take revenge.

Third is "The Professional" by Zesar Lopez (art) and Bruce Jones (story). Zesar only did five stories for Warren which is unfortunate, as I enjoyed his art. From what I hear he did do a lot of stories for skywald though. This story features a man who moves into a new town and seduces a number of housewives by playing up a story about how they resemble his dead wife. He secretly takes pictures of their affairs then blackmails him. Eventually he is undone by the one women he failed to seduce, who gangs up on him along with the others and kills him. In the end it ends up that she is doing the same thing with the various men of the town. Very good story, best of the issue; my only complaint is that Zesar has a few Fernando Fernandez swipes in his artwork from "Goodbye My Love Goodbye" (Vampi 41) and "The Last Testement of Angus Crow" (Vampi 43).

Fourth is "The Last Man Syndrome" by Ramon Torrents (art) and Roger McKenzie. A man finds himself in a town, deserted. Eventually he comes across cloaked skeletons whom he rescues a beautiful woman from. She soon turns into a skeleton and kills him. It is then revealed that the man was actually suffering from a mental condition. Good art as usual here, although according to Richard Arndt's great Warren bibliography Torrents swiped some art from Pablo Marcos (a much lesser artist in my opinion) towards the end of the story.

Last is "Jackie and the Leprechaun King" by Esteban Maroto (art) and Bill Dubay (story). A boy who spends much of his time daydreaming, Jackie, runs away from home into the forest where he meets Bubba, a lying dwarf. The two become friends and Jackie spends all his time in the dwarf's town. His father and the townfolk meanwhile think the dwarves are demons and rush in and kill them all. A pretty good story with very pretty art from Maroto, as usual for him when he did these types of stories.

Little to complain about this issue, with the exception of the Auraleon/Boudreau story, this is a terrific issue.
Posted by Quiddity at 8:39 PM