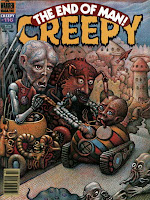 This issue of Creepy was the final one edited by Louise Jones before she left Warren. The bizarre cover is by Terrance Lindall, part of which is reprinted on the table of contents page. The cover has the header "The End of Man!" on the top, although aside from the first story, it does not appear to be a theme of this issue (although all stories here have a sci-fi theme to them).

Up first is "Endangered Species" by Fred Carillo (art, miscredited to Corillo) and Gerry Boudreau (story). This doesn't really look like Carillo's usual art, but then I can't identify it as being anyone else's art, so perhaps it is him after all. Anyway, this story features an outbreak of disease infested creatures at a lab and the woman sent out to destroy them. At the same time, a group of aliens that have targetted humans to be used as clothings arrive and kill a number of people. The disease from the dead humans spreads to the alien races who use them as clothing, and as a result, in an ironic twist, result in saving humanity from being completely wiped out as humans are no longer desirable to them.

Second is "The Highway" by Val Mayerik & Rudy Nebres (art) and Nicola Cuti (story). The story features a futuristic highway and a family that heads across it for vacation. Along the way they figure out that they're going to the wrong place and the stubborn father tries to sidestep the rules imposed on the highway, resulting in them getting stuck there permanently.

Third is "Day of the Locust" by Masanabu Sato (art) and Jordan Black (story). Not too good a story here, featuring robotic humanoids fighting dinosaur like creatures over 6 pages.

Fourth is "Greatest Editor Alive" by Delando & Alex Nino (art, credited as The Nino brothers), and Bill Dubay (story, credited under his pseudonym, Will Richardson). The story features a horror comics editor who has been captured by aliens, but doesn't know it because they keep him brainwashed.

Last is "Graduation Day" by Val Mayerik & Jeff Easley (art) and Bruce Jones (story). The story features spacemen undergoing a simulation, unknown to one of them, who goes crazy, thinking that there is an alien city nearby. In the end it ends up that he was right after all, that aliens are nearby.

Overall not that good an issue. Nothing outstanding is here.
Posted by Quiddity at 7:11 PM