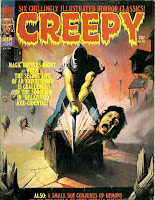 This issue features a cover by Ken Kelly, featuring a axeman chopping at a man's decapitated head. Berni Wrightson handles the frontis, which features Uncle Creepy.

Up first is "Desecration" by Jose Ortiz (art, his first job for Creepy) and Doug Moench (story). A man goes to a pyramid in Egypt and finds out about how it belonged to a pharoah who dismissed the gods. A god actually came down and cursed him forever, locking him in the pyramid. The man heads inside the pyramid and finds the god, which is actually an alien, which brings him to his planet as punishment.

Next is "Portrait of Death" with art by Vicente Alcazar and story by Budd Lewis. An artist digs up a corpse to use in a painting and is blackmailed by a fellow grave digger, whom he kills and also uses in his painting. The painting comes to life however, and kills him, bringing him into the painting as well. Terrific art by Alcazar here.

Third is "Solitude!" by Martin Salvador (art) and Archie Goodwin (story). A group of outlaws takes over a desolate town in the desert. When they decide to stay though, it is revealed that the townfolk are actually werewolves, and they kill the outlaws.

Next is "Pinball Wizard!" by Richard Corben (art) and Doug Moench (story). A rare non-color story by Corben for this era of Warren. Mobsters pressure the owner of a candy store to put in a pinball machine and when he refuses kills him. A boy who befriended the old man summons a demon who kills the mobster, and brings him to hell where he acts as the ball for a pinball game.

"Relatively Axe-Cidental" is fifth, with art by Adolfo Abellan and story by Greg Potter. An executioner sets up his brother in law, who knows his true identity, by accusing him of being a sorceror. Only the same thing ends up happening to him when his angry wife accuses him of the same. Her brother's decapitated corpse ends up being the executioner.

The issue wraps up with "Nightmare!, featuring art by Isidro Mones and story by Mones & Gerry Boudreau. The story features a man having a recurring dream about encountering bizarre looking cloaked monsters. At the end of the story when life goes just like the dream, the man ends up going crazy.
Posted by Quiddity at 8:07 PM