My first ever issue of Vampirella is the one I cover today, and its a pretty damn good issue. The cover is by who else, but Enrich.

First up is "City of Ghosts" by Jose Gonzalez (art) and Roger McKenzie (story). Vampirella is stranded in the desert and comes across a deserted town where she meets her husband from Drakulon, Tristan. Adam arrives but is shot by him. Eventually it ends up that it was all an illusion and Vampi is reunited with Pendragon and Adam.

Second is "Rusty Bucklers" by Esteban Maroto (art) and Bruce Jones (story). The story is about an old man, Dete, who joins a young knight on his trip to defeat a nearby sorceror and rescue the lady trapped there. It is revealed that many years have passed, the sorceror's dragon has died of old age, the sorceror himself is gone, and the lady is old too. Dete sleeps with her and is killed by the young knight, who overreacts.

Third is "Stand-In" by Carmine Infantino & Dick Giordano (art) and Bruce Jones (story). The story takes place in the future, where people's deaths can be predicted. A company, Surgo Inc offers to replace the victim with an employee in whatever accident may occur. The story surrounds one of these employees and his relationship with a reporter he meets. 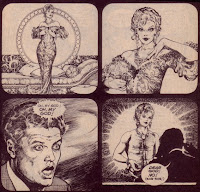 Fourth is one of my top 5 Warren stories of all time, "Magnificent Ephemeral" by Ramon Torrents (art) and Bruce Jones (story). The story is about a newspaper reporter, Scott Westly, working on a story about the mysterious Gloria Winsome, a Marilyn Monroe-esque actress who vanished off the face of the Earth after a single movie. Scott becomes completely obsessed with her and spends months trying to research what become of her. Eventually he discovers the truth and is able to meet with her and she shows him a video which reveals the truth, that she's actually a man! Wanting to preserve the secret forever, he asks Scott to kill him and he does so, then hangs himself. Amazing story with one of Warren's biggest shock endings and terrific art by Torrents.

Last is "An Insult to Science" by Jose Miralles (art, in his sole story) and Fernando Fernandez (story). The story is about a disbeliever in the spirit world who has an experience with a woman whose been dead 25 years that changes his opinions about the subject for good. Miralles's art is fairly good, kind of like Fernandez's.
Posted by Quiddity at 7:57 PM