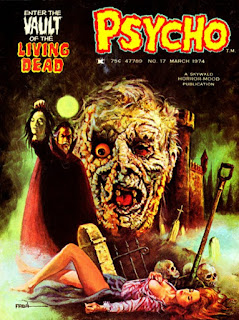 Salvador Faba provides the cover for this issue of Psycho, cover dated March 1974.

We begin with "The Death Pit", a one page frontispiece by Al Hewetson (story) and Domingo Gomez (art). Featuring a band of the dead, this reminds me of the story "Phantom of the Rock Era" all the way back in Nightmare #4.

The first full length story is "The Black Sculpture of the Pharaohs" by Al Hewetson (story) and Ricardo Villamonte (art). A pharaoh obsesses over a cat statue he claims took him 20 years to find. He gets into an argument with his queen and stabs her to death, claiming it was an accident. She is buried in a tomb as a mummy, but soon after the pharaoh realizes the cat statue is gone, as is his wife's mummy! It is shown that this is a plot of his high priest, who seized the statue and the mummy to make it look like the dead queen did it. However the dead queen's mummy is indeed alive and kills the priest, then tosses his body where the pharaoh and others can see it. The pharaoh now knows the high priest was behind things and orders his men to search for his henchmen for the statue. He doesn't realize that the statue is in the tomb with the mummy of his dead queen. A rather weak start to the issue, with all that trouble about a statue and some weak art from Villamonte.

Next is "This is Your Life, Sam Hammer, This is Your Death!" by Al Hewetson (story) and Jose Cardona (art). Police officer Sam Hammer is criticized by his boss for not making enough arrests and to catch some criminals in the act. Through information from a bum, Sam and his partner confront a crew of criminals making fake license plates. While trying to arrest them Sam is forced to kill one of them and his partner is killed in a machine. Suddenly, crazy things start happening. His sandwich is alive! He finds a corpse in the bathroom. The time clock punches him. And so on. He eventually wakes up at his own funeral! He is told that he is on a TV show, This is Your Life, This is Your Death. His partner and everyone else was in on it. They get prizes for their participation, while Sam gets punished by being killed! Quite a ridiculous story, and its a good thing they revealed the big action from the license plate criminals as being an act, as multiple people dying over fake license plates is considerably absurd.

Third is "This is the Vault of the Living Dead!" by Al Hewetson (story, credited to Harvey Lazarus) and Maro Nava (art). A group of drunks in a bar attack a group of mysterious, peaceful hippies that come in and sleep during the day, and go out at night. The drunks try to push them around with no luck, then suspect they are vampires and bring them out in the daylight, but nothing happens to them. The drunks then go even further, murdering all the hippies. The drunks leave, but then the hippies get up and go find them, attacking them. It turns out they are indeed vampires, and that brief exposure to sunlight doesn't kill them after all. They are generally peaceful but the behavior of the drunks have caused them to satiate their hunger and attack them, sucking their blood. A rather weak story with some really over the top action by the characters and some particularly dreadful art by Nava.

Fourth is "These Are the Things That Are Dead" by Al Hewetson (story, credited to Howie Anderson) and Felipe Dela Rosa (art). A group of guys in Manhattan decide to steal a subway train. They jump inside, knock out the conductors and cause a big crash, jumping out of it mere seconds in advance. They then grab a car and go on a driving spree, hitting a parked car. When the policy arrive and find the car empty, we realize that the three of them have been dead all this time. Some okay art from Dela Rosa here, but the ending to this story I could see from miles away.

Fifth is "The Crime in Satan's Crypt!" by Ed Fedory (story) and Antonio Borrell (art). A man takes out a contract hit on a young woman in an alley. Dressed in robes, he hides from the police then finds his hiding place leads to a tom, which he heads into, finding solid gold and a casket with a dead body in it that makes him think it is alive. Soon a group of robed men, led by a naked woman show up, commanding the body, Lothodeus to rise and help guide them for the coming of Satan. The killer tries to flee, with the gold but is seen and chased. As he makes his way out the ceiling of the tomb starts collapsing. He makes it out just in time, only for a statue in the graveyard to fall on and kill him. A rather lame ending, but some good art from Borrell at least.

Next is "The Lunatic Class of '64" by Jane Lynch (story) and Emilio Bernardo (art). Walter Lyman says goodbye to his wife and kids, planning on going to his high school reunion. As he heads there we flashback to Walter being a loser in high school. The girl he liked rejected him due to his pimples. No one would sign his yearbook, he even has a girl who refuses to cheat from his notes when he offers. Walter arrives but surprisingly is treated well by his old classmates. Thinking everyone is in on a secret plot to make fun of him, he knocks over some candles, causing the entire place to burn down. In our final panel we see a classroom filled with skeletons! Lynch does a decent job in her Skywald debut, although I'm not really sure where she was going with the final panel.

Seventh is "The Narrative of Skut" by Al Hewetson (story) and Luis Collado (art). Some mobsters arrive at a local boarding house and shoot up the old lady who runs it. The small sized Skut runs errands for the mobsters including dragging out the body, getting them food and other errands. He decides to rat out the mobsters, revealing their location to another mob who shoot them up. Not wanting to be seen with the bodies, Skut brings them to the basement where the old woman appears, alive, despite the bullets already in her and the more Skut fires into her. She grabs a hold of him and drags him into the grave he dug, trapping him there until he starves to death. Collado's art is very strong here, including a number of very detailed, highly realistic looking panels.

We conclude with "Monster, Monster, Heed Death's Call" by Augustine Funnell (story) and Ricardo Villamonte (art). Our werewolf protagonist, now back to a human, the gypsy Kirsten and her daughter Nola travel, fleeing from the group of gypsies after them seeking an amulet Kirsten has. Kirsten decides to leave the werewolf behind but then the other gypsies arrive and attack her. the werewolf, now back in said form, goes on a rampage, slaughtering all of them except a veiled woman who has stayed back and at story's end removes her veil and swears the amulets will be hers. This series continues to be rather mediocre, with a rather dull, repeated plot and often inconsistent or poor art from Villamonte.
Posted by Quiddity at 9:42 AM