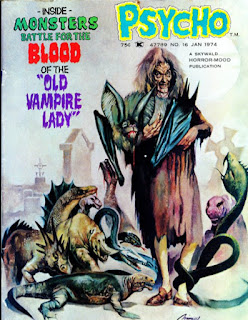 Domingo Gomez provides the cover for this issue of Psycho, cover dated January 1974.

First is "The Old Vampire Lady" by Al Hewetson (story) and Jesus Duran (art). A young photographer comes to interview the wretched old vampire lady. She tells him of her past, starting from her childhood and how her headmistress was a vampire. At 10 years old she was bitten and changed into a vampire herself and she would bite classmates and boys. Eventually a man named Baron Meinster who is a vampire comes to see them and they live with him, and our protagonist, now grown up, turns on the headmaster along with Meinster. She and him kill many victims but Meinster is eventually found and killed. Returning home, she finds her mother has died, of a broken heart after finding what came of her daughter. She eventually finds a man who falls in love with and marries her, but upon finding out she is a vampire, his strong religious beliefs cause him to commit suicide by stabbing himself. We return to the present, finding out that the old vampire lady is 175 years old and she brings the photographer to a tomb where she still posses the now rotted body of her husband. Some excellent, macabre art by Duran here and it was a fairly interesting story too, telling us the various events of the titular character's life rather than being focused on just one plot.

Next is "Monster, Monster Rise from Thy Crypt" by Augustine Funnell (story) and Ricardo Villamonte (art). Where we last left this series, our protagonist, a werewolf had shot himself in the head. But it seems like he hasn't died, as it was not a silver bullet. The bullet is still lodged in his head however. An old gypsy woman, Kirsten, finds him and wondering if he is her son brings him out with her while he is unconscious. Soon her daughter Nola approaches, being chased by a man named Dominik. She demands Dominik leave and she, Nola and our protagonist, now in his human form, travel in a wagon to the gypsy village where Dominik declares (without her consent) that Nola is marrying him. Back in his werewolf form, our protagonist attacks Dominik, but the bullet lodged in his head weakens him and he, Kirsten and Nola flee when a plank is thrown at him (quite lame, I know) and Dominik swears revenge as the story ends. This series had an interesting enough start, but now its starting to get dragged out (and now involving gypsies after seeming to be a urban story earlier is odd).

Third is "They Lived in Darkkos Manse!", the latest in the Darkkos Manse series, by Al Hewetson (story, credited to Joe Dentyn) and Maro Nava (art). A fugitive named Paul Muni flees from the authorities into the swamp and comes across Darkkos mansion. He climbs to the top of it as his pursuers arrive and sees a humanoid monster who kills his pursuers and dogs, but then climbs the mansion towards him! Paul jumps off, but into the quicksand, which he sinks into. The monster pulls him out and he is now another monster guarding the swamp. Nava's style comes off a bit cartoonish here, but it overall works for this story.

Fourth is "The Thing with the Red Ribbon in Its Hair", a one page feature by Al Hewetson (story) and Domingo Gomez (art). Tom marries a woman named Clarice for her money then kills her, revealing to her that he is in it for the money. But she either returns from the dead or doesn't die at all (the narrative is rather confusing) and forces him to live out his life with her. Some okay art by Gomez but a rather confusing story.

Fifth is "The Thing in the Box" by Al Hewetson (story, credited to Harvy Lazarus) and Fernando Rubio (art). A rather odd approach in this story in that only the final panel has any dialogue in it. An old man's wife falls asleep while they are on the porch, and he takes the opportunity to kiss another old woman who stops by. His wife wakes up, sees it and goes to the shed where she grabs a box. She leaves it at her rival's front door, who opens it and some tentacles come out and she dies. The old woman then puts it back in the shed. That's about it, a pretty simple story.

Sixth is "Hunger of the Slaughter-Sludge Beasts!" by Doug Moench (story) and Jesus Suso Rego (art). Detectives Harry and Frank investigate some weird occurrences where bodies are found, reduced to mere skeletons in areas with water or drains such as a bathtub or swimming pool. Meanwhile the wealthy Clinton owns a company that dumps chemicals into the river. Naturally, these chemicals have led to some sludge like creature forming and it is soon revealed that it can take the form of inanimate objects. It turns into a garbage can and then kills a homeless man that goes through it. We then see it traveling through drains and killing various people in their homes and a woman at a laundromat. Harry and Frank discover what is happening when they see the sludge at the lake, but it ends up killing them by taking the form of their car. At the end of the story we see that it even can take the form of a plane and a human being as a man returns home to his wife, who is actually the sludge. A pretty good story here, both horrifying and funny at times and Suso provides his usually strong art performance.

Seventh is "A Tale in Old Egypt: The Premature Burial" by Al Hewetson (story) and Felipe Dela Rosa (art). This brief two-page feature displays via hieroglyphics someone being mummified, waking up in a tomb and trying to get out but finding themselves locked in.

The issue concludes with "Greed" by Al Hewetson (story, credited to Edward Farthing) and Ricardo Villamonte (art). A little girl's parents don't believe her when she tells them of a fish monster. We see that the monster, who is humanoid in form is real and he kidnaps her, telling her he will kill her before their eyes to teach humanity a lesson. He brings her to a cliff and prepares to throw her off in front of the large crowd that gathers to rescue her. The father is able to climb up the cliff and knock the monster off, but in its last moments he shows mercy and tosses the girl onto a cliff so she doesn't die with him. But unfortunately no one sees or hears her, so she dies. Quite a depressing ending here!