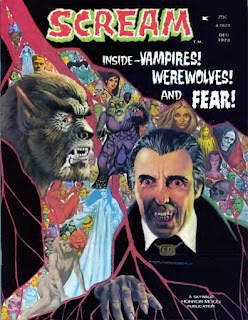 Xavier Villanova provides the cover for this issue of Scream, cover dated December 1973.

First is "The Phantom of the Opera" by Al Hewetson (story) and Jesus Duran (art). Having never actually seen the movie Phantom of the Opera, I am not sure how faithful an adaption this is. Raoul and his girlfriend Christine attend the Opera where the titular phantom has dressed up as death, from Edgar Allen Poe's Masque of the Red Death. As Christine practices singing, Raoul hears the voice of the madman and fears for her. Soon after he proposes to her (this part of the story is quite confusing as she refuses to ever marry on one page yet seems to accept a proposal a page later). Christine tells Raoul of how the phantom had actually captured her and after she unmasks him, demanded she take his hand in marriage. The day Raoul and Christine plan to elope, he finds out from The Persian, another man at the opera that the Phantom has captured Christine. Raoul and the Persian search for and eventually find them, with the Phantom demanding Christine marry him or he will kill all the guests. The Phantom then plans to drown Raoul and the Persian, escaping with Christine, yet she threatens to kill herself unless he save the two of them, which the Phantom does. As the story ends we find that he died soon after. Duran's art as usual is pretty good here (reminding me at times of Esteban Maroto in fact), but the lengthy story is quite confusing to me, especially with character motivations of Christine and the Phantom. Perhaps it would have helped if I was more familiar with the source material.

Next is Lady Satan in "What is Evil and What is Not" by Al Hewetson (story) and Ricardo Villamonte (art). Anne Jackson, the titular Lady Satan rises from her grave. Anne and her friend Berenice investigate the black witch queen whose spirit now inhabits her body, including rumors that she was a vampire and eventually burned at the stake when she cursed her killers. Lady Satan now in control of Anne's body again, she bites the neck of Berenice turning her into a vampire. As the story ends we are told Satan wants a child. I haven't been the biggest fan of this storyline thus far, and Villamonte's art often looks a bit rushed.

Third is "The Fall of the House of Usher", an adaption of the Edgar Allen Poe story by Al Hewetson, with art by Maro Nava. Our protagonist goes to visit his friend Roderick Usher, who lives in a gothic mansion and appears stricken by some wretched illness that makes him look quite decrepit. We also meet Roderick's ill sister Madeline, who looks as sick as he does. Eventually our protagonist is told that Madeline has died and he leaves her in a vault, wanting to wait to entomb her as is the family tradition. Later as a storm rages, we find that Madeline has not in fact died, she walks before them and collapses upon Roderick, killing them both. Our protagonist flees as the entire mansion collapses. This is a decent adaption of the Poe story, although Nava's story can be a bit too cartoonish at times for the characters. We've got at least one panel in this story with a Rafael Auraleon swipe (a commonly appearing artist for Warren).

Fourth is "Messers, Crypts and Graves: Undertakers" by Al Hewetson (story) and Ruben Sosa (art, his Skywald debut). A pair of undertakers are partners, Graves and Crypts, with Graves getting angry at Crypts for spending too much money on a new hearse. We see in flashbacks how they swindle their customers, such as taking gold out of their teeth or claiming a cheap pine coffin is instead high priced walnut. Graves plots to poison his partner with a drink, but Crypts hears him saying it and pours out his rat poison, replacing it with something else. When they drink, Crypts fakes a heart attack and falls to the ground, but then gets up, revealing he is alive, causing Graves to collapse from a heart attack. Crypts then walls up Graves behind a brick wall. Graves has not died though and when Crypts reveals he knows all, Graves reveals that the rat poison really was meant for rats, and he used embalming fluid to poison him instead. Sosa's art is okay here, but not as strong as many of the other artists. It is an at least decent story though, and reminds me of the type of story we'd often see in EC comics.

Fifth is the latest Nosferatu story, "The Tale of Another" by Al Hewetson (story) and Zesar Lopez (art). Another of Nosferatu's dinner guests tells his tale, this time the frog-masked man Charles Freeman. An American, he used to hunt in the swamps of the everglades but as this practice came under fire he resorts instead to be a guide to "sportsmen" who decide to ignore the law and hunt anyway. It is through this he meets a man named Nicholas Dickens whose mauled face he claims came from a Rhino attack years ago in Africa. He claims a trunk is in the swamp with 2 million dollars inside. The two head there on a helicopter and Charles heads down to retrieve it, finding a horrific tentacled monster, an emissary of Satan guarding it. He is able to bring it up but demands an answer from Dickens as to what is in the trunk. Upon opening it he finds his corpse inside! It seems that Dickens was cursed by Satan and needed someone to find the trunk and open it to take his place and free his soul. Freeman removes his mask and reveals that he is now mutilated much like Dickens was and will remain in this state until he finds another to take his place.