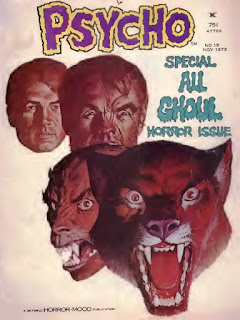 Vicente Segrelles provides the cover for this issue of Psycho, cover dated November 1973.The cover identifies this as an all ghoul issue, although the cover is a man turning into a werewolf! In fact, not all stories are ghoul related, although most are.

The frontispiece for this issue is "How to Make a Mummy" by Al Hewetson (story) and Maelo Cintron (art). It features what else, but directions on how to make a Mummy.

We kick the issue off with "The 13 Dead Things" by Al Hewetson (story) and Jesus Duran (art). This story was originally intended for issue 13, and was the cover feature for that issue, but due to a delay in the artwork wasn't published until now. It was certainly worth the wait! This is the most over the top, hilarious Skywald story yet. In the 1600s, the Count of Monte Godo lays chained in the black cells of an asylum, with rats for company. When an old man in the fellow cell dies, our protagonist gets an idea, about how he can fake his death and escape the asylum when they toss a sack with his "dead" body into the moat outside. He imagines how he will get his revenge on the 13 who wronged him. We are treated to panel after panel, for three full pages of our protagonist brutally murdering people one after another. He strangles his wife and her lover. He stabs people through the chest, he cuts their heads off. He bashes a banker's head in, he shoves a knife through the head of his lawyer, he smashes a judge in the face with an ax, on and on, and collects everyone's heads to feed to the rats in the cells. Our protagonist then realizes the downside of his plan, what if the sack is tied too tight, and he drowns? He swears that won't stop him though, and we once again are treated to panel after panel, page after page as our protagonist, now a rotting corpse, brutally slaughters the 13 people all over again. Back in reality, our protagonist decides to set his plan in motion and play dead. But when he realizes he can't move, he discovers that most of his body has been consumed by the rats! This story is such a perfect representation of the Skywald style. There's not much of a plot to this story, but wow, across 12 pages we are treated to about as much over the top mayhem one can possibly get in a short story. Just when you think page after page of our protagonist brutally murdering people is as ridiculous as you can get, we go through it all over again, even more ridiculously as his corpse does it! This was such a blast to read, the best Skywald story thus far.

Second is "When the Bad Moon Rises... I Am a Ghoul!" by Rodion Eis (story) and Maro Nava (story). Got no idea who Rodion Eis is; it wouldn't surprise me if its one of Skywald's usual authors under a pseudonym. This story features a couple of newlyweds, Peter and Tina who are on their honeymoon. When Peter gets asked by his employer to take photos of the Andes for a travel feature, they decide to go ahead with it and hire a bush pilot, Stein. Stein is a drunk and due to the plane's battery being dead they are forced to touch down in the Andes, then travel through them, making their way into the mountains where they are attacked by ghoul bats. Eventually Stein is killed and Tina reveals that she is a ghoul herself, desiring to eat his body. Nava's style here is drastically different than that which he used in his prior story, where he looked a lot like Jerry Grandenetti. None of that here. Also the art style is really grimy and dark throughout, at times making it hard to read.

Third is "The Ghoul" by Al Hewetson (story) and Ferran Sostres (art). The passenger ship S.S. Captain Cook makes a trip across the Atlantic. One of its passengers is killed by a beastly ghoul. The passengers of the ship start questioning the captain, even offering their own thoughts on what it could be (a werewolf, a homicidal maniac, a vampire, etc...). The captain is hesitant to believe any of them and soon there are more victims. Because they can't find the killer, the captain believes it must be one of them doing it and orders everyone to stay in their cabins. Eventually though we realize why they couldn't find the killer, the ghouls have actually been coming aboard through nearby icebergs! Soon a group of them jump on board and kill everyone on the ship.

Fourth is "The House of Demons" by Chic Stone (story) and Amador Garcia (art). Vincent and his wife Melanie go to visit his dying uncle Sinclair. There they meet his nurse, Christine and she leads them up to him. Sinclair tells off Vincent, saying he knows he is here because he is dying and has been foolhardy since his parents died. He nonetheless lets them stay the night. Behind closed doors Vincent and Melanie fight with one another. Meanwhile a stranger watches them, then Christine, as she goes to the basement to feast on something. A scream emits out, waking Vincent, who heads downstairs and starts coming onto Christine. She tells him of a ghoul, a being with a rare disease which eats away at its cells unless it consumes new flesh, which will in turn make it younger and more powerful. Just then we realize that both Sinclair and Christine are ghouls, and Sinclair has been able to restore his youth by eating a local visitor. Vince is killed, but Melanie and the stranger come upon them. The stranger says by shattering the reflection of a ghoul he can kill them and he does so, causing both Sinclair and Christine to age to death. The stranger reveals himself to be Sinclair's son, but then reveals that he is a ghoul as well and strangles Melanie. This story is a bit over complicated and it is hard to tell the male characters apart because they look so much alike (granted, they are related).

Fifth is "Ghouls Walk Among Us" by Augustine Funnell (story) and Ferran Sostres (art). A trio of ghouls kills a man in a graveyard. The next day the police, Bill and Carl, find the body. They report to the police chief who refuses to believe anything supernatural is going on and thinks it is just a clever insane man. The ghouls continue to find victims, including Bill and Carl. As the story ends we find that the police chief was one of the ghouls and has been wearing a mask. Sostres' art is fairly strong here, helping make up for a story which is only so-so.

Sixth is "The Town That Crumbled" by Al Hewetson (story) and Jesus Suso Rego (art). This one pager talks about corrupt, dead places on Earth, such as a ghost corpse in the wild west and a corpse in Atlantis, underneath the ocean depths.

Seventh is "I Laugh the Laugh of the Graceful Dead!" by Al Hewetson (story) and Felipe Dela Rosa (art). Suzette is a ballerina dancer, jealous of her rival Monique who gets all the accolades. She kills Monique by stabbing her with a knife then hides her body in a coffin. When Monique fails to show for a dance, Suzette is able to take her place as she had hoped. Yet suddenly Monique appears on the stage with her and gets everyone's applause. After it is over Suzette chases after Monique, finding her in the coffin where she left her. Monique rises from the coffin and strangles her, telling her she can't kill someone who is already dead. I'm not used to seeing a Dela Rosa story with predominantly female characters. There's no indication that Monique is a ghoul, she just as easily could be a vampire or a body risen from the dead.

The issue concludes with a one page advertisement for Scream, featuring some strong art from Zesar Lopez.
Posted by Quiddity at 3:34 PM