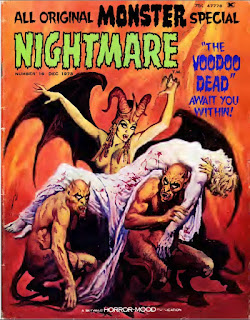 "The Voodoo Dead" kicks off the issue, with story by Al Hewetson (credited to Joe Denryn) and art by Ricardo Villamonte. A vampire decides to escape to the Caribbean. There he comes across a priestess leading a ceremony with several demons. She orders her demons to destroy the vampire, but soon regrets it as he has the qualities she romantically desires. She soon finds he is alive after all, but he attacks her, biting her on the neck then is killed for good by the demons. She continues to regret the loss of him and now is a vampire herself. An average story to kick off the issue; Villamonte's art is good on some pages, but rather mediocre on others.

We next get two chapters in "The Werewolf Macabre" series, the first titled "The Birth of a Beast" as written by Al Hewetson and drawn by Fernando Rubio. Chapter two is "Dragnet: Werewolf" also written by Hewetson and drawn by Jesus Suso Rego. The first story introduces us to Ted Williams, police commissioner of Chicago, who unknown to him, is actually a werewolf! He slays someone while a wolf and then investigates while human, not believing those who speculate a werewolf is behind it. A trip to a gypsy causes him to reconsider though. In flashbacks we find out that his father had a fling with a witch while his mother was pregnant with him and when he ended it, the witch cursed him into becoming a werewolf, a fate that Ted now suffers from as well. As the first chapter concludes, Ted determines he is a werewolf, then bursts out in werewolf form while in the police headquarters. This continues into the second chapter, where Ted attacks many while in werewolf form. Meanwhile in a special jail cell a woman also becomes a werewolf and bursts her way out. Ted flees into the streets, as does the woman, as the police pursue. In flashbacks we find out about the woman; her father was a werewolf and her mother a bearded lady. She comes across Ted in an alley. They kiss, but the policy come upon them and shoot them with silver bullets. This ended more abruptly than I thought it would, so I guess instead of a new series its just this two part story. Interesting choice to have two different artists draw it. Suso as usual is one of Skywald's best artists and does a terrific job, especially when the woman becomes a werewolf.

Fourth story is "When the Devil Sent Us Death!" by Augustine Funnell (story) and Maro Nava (art). A mysterious man comes to a town to stay at a hotel. Soon afterwards a murder occurs, then another. People suspect it has something to do with the stranger and confront him in his hotel room. He claims to have been in the room the entire time and to not be involved. One of the men heads to the hotel room and the stranger leaves the next day. The man decides to use his hotel room and somehow he determines that the stranger works for Satan and brings hardship wherever he goes. The man is now going to continue in his footsteps. This is another story where Nava's art looks extremely like Jerry Grandenetti's. The story itself is only so-so, with not much of a point to it.

Fifth is "The Roots of Evil" by Al Hewetson (story, credited to Howie Anderson) and Antonio Borrell (art). A ship returns from China, much of its crew infected by the black plague. The captain orders the dead launched off the ship into a nearby town, which causes many in the town to become infected and the black plague rages its way through Europe. The story focuses on the ship's captain, whose crew mutiny and put him on a small boat with a few of his men and a corpse. After drifting for a while, one of his fellow men shoots himself, but before any others do so they spot the ship returning towards them, everyone on board now dead. It crashes through the boat, killing the remaining men with him but the captain makes his way on board. The ship starts rotting before his eyes and he is absorbed into it, proclaiming the ship has become the root of evil. An interesting story here (I wasn't aware this is how the black plague started) and Borrell provides some strong art. I've read that this story was originally intended as the cover story for Scream #1.

Sixth is "The Vampyre!" by Ed Fedory (story) and Pablo Marcos (art). This story was originally advertised as appearing in Psycho #13, but for some reason was held off until this issue. This story introduces us to a vampire, going into hiding in his coffin. We find that he has killed four children in the span of only a single week. The local doctor claims his own son can be used to slay the vampire. His son, suffering from some sort of disease will be used as a sacrifice. Knowing he will die from it one day the boy is willing to act in this role. The vampire arrives and bites the boy as expected, and is repeatedly shot by several men with rifles, to no effect. The vampire returns to his cave but finds himself extremely weak and finds that his body is bleeding everywhere he was shot. As he dies, we go back to the doctor, who reveals his son had a disease that prevented his blood from clotting. Marcos' art is only so-so here, but that certainly was a unique way to slay a vampire.

Seventh is "Hell Hath No Face" by Al Hewetson (story, credited to Harvey Lazarus) and Ricardo Villamonte (art). This story surrounds the ship Ambergris. Heading back with whale meat (blubber), it is suddenly attacked by a giant octopus, after the whale meat! The octopus makes its way into the hold where the meat is being stored and they are forced to wait until it is finished. When it departs, the men head there to see what is left of the whale meat and are horrified to find numerous baby octopi! This story is essentially just a variant of "The Monstrosity Strikes!" from Psycho #14, with an extremely obvious ending and is even drawn by the same artist. An extremely mediocre way to close out the issue.
Posted by Quiddity at 8:38 AM