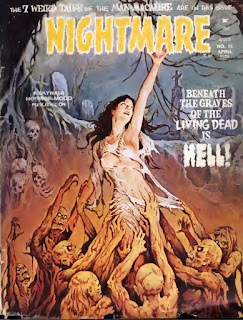 
This issue's stories are identified as the 7 Tales of the Man-Macabre. Zesar Lopez provides us with an introduction page featuring editor Al Hewetson.

First is "The Vampire" by Al Hewetson (story, credited to Howie Anderson) and Zesar Lopez (art, miscredited to Cesar Lopez). This isn't so much a story, but rather a display of four different possible endings to a scenario where a woman, Anne, has been seized and bitten by a vampire and her father and lover come to rescue her. In the first ending, Anne tricks the vampire into staking himself by laying in his coffin where she has placed it. In the second ending there are suddenly several other female vampires and Anne pulls open a curtain, causing the sun to kill her and the other vampires. In the third ending the vampire bites the lover but Anne kills the vampire with the cross and she and her lover remain as vampires themselves. In the fourth ending the vampire holds Anne hostage but she stakes herself and him at the same time, killing them both. Zesar's art is the highlight here; I do at least appreciate they didn't waste our time by dragging out all these different endings across 4 different stories.

Second is "The Werewolf" by Al Hewetson (story) and Jesus Suso Rego (art). A Dr. Wescott comes to an asylum to meet Dr. Mann. Just after arriving, one of the patients, Elton, escape and changes into a werewolf with the full moon. Mann shows Wescott around, revealing that their 56 inmates are all some sort of abnormal creatures. He shows him a were-vampire and even a were-lizard! As the story ends we realize how they are able to keep a hold of these monstrous prisoners and the doctors at the asylum, including Wescott are werewolves themselves! I enjoyed how ridiculous this story is and Suso provides his usual strong art.

Third is "The Creep" by Al Hewetson (story) and Jesus Duran (art). The ugly, short, hunchback Clarence, has been picked on his whole life and is known to the townsfolk as the Creep. He is only able to find work at the local graveyard burying the dead. Soon a man named Craw arrives with his young wife, asking Clarence to bury his brother. Craw reveals that he is from out of town and we soon find out why as he kills his wife once the grave is dug, claiming she and his brother were having an affair and he wanted to take care of things far away. In exchange for him staying quiet, Craw pays Clarence some money, but Clarence poisons him and buries him with his brother and wife. Clarence has had enough of what Craw had and threw away or flaunted such as his brother, wife and money and decides that it is time for him to live up to his nickname. Another pretty strong effort both from Duran and Hewetson here.

Fourth is "The Dead Things" by Al Hewetson (story, credited to Stuart Williams) and Ricardo Villamonte (art). This is a brief story at only two pages long. A man buries his wife, but we soon find that he has a girlfriend and even brought her with him. Once everyone else leaves, hands erupt from the ground and pull both him and the girlfriend below the dirt.

Fifth is "The Vulture" by Al Hewetson (story, credited to Joe Dentyn) and Jose Cardona (art). Simon Walker is stranded in the desert after his jeep breaks down and comes across some vultures, including a newborn. He is soon rescued and brings the newborn with him, making it his pet. The vulture grows up, but we find that he has raised it with the purpose of it killing his business partner. When he shoots at the vulture it flees, eventually being found by a young boy who wants it as a pet. The boy's father refuses to let him have it though and the vulture kills him when he attacks it with an ax. The vulture makes its way to Germany where it is bound and put in a cage. A man comes and frees the vulture and bring it with him to his mansion, wanting him as a pet and revealing himself to be a vampire. But the vulture has had enough of humans and kills him, returning to the desert.

Sixth is "The Ancient One" by Al Hewetson (story, credited to Howie Anderson) and Ricardo Villamonte (art). Jack Daniels, a reporter is the oldest man alive, 150 years old. One day a couple of men visit him claiming they are investigating a possible vampire outbreak and asking him about a prior report he made on the subject. Years before Daniels had come across a beautiful vampire and staked her to death, but no one believed him. When the men leave, Daniels goes to his basement where we realize that he didn't actually kill her. She has lived with him many years and is now old like him. The two argue, leading to Daniels staking her! As she is dying he feels bad, leans into her, and she stakes him too! Hearing the screams, the two men rush back, but is too late, Daniels and his companion have died.

We wrap up with "The Thing in the Space" by Al Hewetson (story, credited to Harvey Lazarus) and Emilio Bernardo (art). This story's host appears to be the Slither Slime Man from Psycho #9 (or at least looks like him) and calls himself the Man Macabre and speaks of how the themes of the prior six stories all make up who he is. This seventh story appears to be a take on Alice and Wonderland. Our main character (I will call her Alice to make it easier) follows a rabbit into a hole in the ground, bringing her into all sorts of adventures. She eats a cake that causes her to grow to great heights, she meets the Cheshire cat, nearly drowns in a flash flood, meets a caterpillar-like man constantly attacked by large demons, meets the mad hatter, the queen of hearts and nearly has her head chopped off, then wakes up, revealing it to all be a dream. Or was it? Many of the charters stand in her yard with axes ready. This story was all over the place, but then when you think about it, wasn't Alice in Wonderland that way?