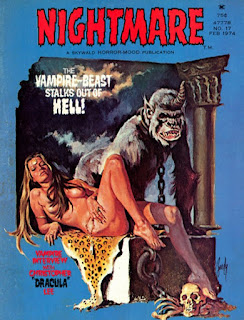 Sebastian Boada provides the cover for this issue of Nightmare, cover dated February 1974. Vampires dominate this issue, with 4 out of the 6 full length stories including them.

First is "The End of All Vampires" by Al Hewetson (story, credited as Howie Anderson) and Jesus Suso Rego (art). When a college professor outlines to his class plans to kill all vampires, he brings the hunchback Dean of the University, Grieves in to speak with the class. Grieves speaks of how a female student at the university, named Sancho is in fact a vampire. Many men she has come in contact with have died anemia shortly afterwards. When Sancho is followed she is witnessed embracing a vampire in a graveyard and they are both taken into custody. Examination shows the man to be decomposing and Sancho to be in her 80s despite looking the age of a college student. When Grieves confronts Sancho and convinces her to talk, she reveals how she was born 100 years before and her gypsy parents showed her around as a vampire as a child. When a real vampire came across them he bit her, turning her into one. Despite revealing all, Grieves stakes her in the heart, killing her. The class over, Grieves returns, alone to a lair in the basement where we find that he is not a hunchback but has been hiding his wings and is in fact a true vampire himself, seeking to kill all human vampires. The highlight of this story is the art, Suso providing arguably his best performance yet. Sancho appears modeled after Carol de Haro, who modeled for many of the Selecciones Illustrada artists such as Luis Garcia and Jose Gonzalez. We have a fairly strong story here as well.

Next is "The Vampire out of Hell" by Al Hewetson (story, credited as Edward Farthing) and Ricardo Villamonte (art). Photographer Tony Jones speaks of Sonia Greene, a colleague of his who insists they go on an expedition in South America. He and several other men follow her. When their guides tell them they have approached a forbidden city and can't go any further, Sonia insists continuing, even if the natives flee. As they approach the city several vampire bats arrive as well as a gorilla-like beast and bring Tony and another man into the forbidden city where Sonia is sat on a throne as their new queen. Tony's colleague David is killed, his blood drunk by her new subjects. Tony demands she speak to this act yet she says not a word and he curses her as he is killed as well. As the story concludes we find that Sonia has not spoken because her new "subjects" have removed her tongue. While this story has a decent ending to it, we never get an explanation for why Sonia was so insistent they head to the forbidden city in the first place. The quality of Villamonte's art wildly fluctuates throughout this story, at times reminding me of Esteban Maroto's work, but in other panels looking rather sloppy.

Third is "The Night in the Horror-Hotel" by Al Hewetson (story) and Jesus Duran (art). Reed and Anne, newlyweds traveling through a storm the night of their wedding are forced to stop at a hotel staffed entirely by freaks. After the freaks perform for them, Reed and Anne start getting freaked out, causing the freaks to tell them their sad story of how they purchased this hotel, hoping to do something other than work for a circus, yet any guest has the same horrified reaction. That night, Anne discovers Reed not in their bed but with the freaks and demands they leave. Reed states that this is in fact his home and he is a freak as well, revealing a third eye on her forehead. Anne reveals that she has a third eye herself though, realizing they were meant for each other. That night we get one final twist however, Anne is not human but an alien and contacts her superiors and is told she can stay with and mate with him as part of her mission. An overall strong story and Duran provides some good art as usual.

Fourth is "The Psycho" by Al Hewetson (story) and Ruben Sosa (art). Our protagonist, a reporter named Ralph tells us his story and how he came across a photo of a girl with two pin holes in her neck, believed to be a bite from a vampire by one of his colleagues. Ralph doesn't believe it but while walking outside at night sees the vampire attacking a woman. His boss wants him to go out and track down the vampire, so Ralph arms himself with silver bullets. Eventually he comes across the vampire again and threatens him. The vampire provides him a proposition however and Ralph takes him up on it, becoming a vampire himself. This is a so-so story, whose end twist is repeated two stories later in this same issue. I thought silver bullets were for werewolves, not vampires!

Fifth is "The Inquisition" by Al Hewetson (story, credited to Joe Dentyn) and Lombardia (art). In Salem an old woman is tortured by several hooded men, who declare her to be a witch. She says no to all their questions. Eventually they tell her that if she reveals she is a witch they will have mercy on her. Lying, she says she is a witch and they chop her head off. The men then take off their masks and we find that they are newspaper reporters who are doing heinous acts like this so they will have something good to report on. Lombardia's art is fairly strong here as is the twist at the end of the story, something that seems less and less unusual in the age of "fake news" that we live in now.

Sixth is "The Auto-biography of a Vampire, Chapter 1" by Al Hewetson (story) and Ricardo Villamonte (art). Our titular vampire tells his story, calling himself Judas. He speaks of how he grew up in Spain in the 17th century in a rural town. One day a vampire comes by, strikes down his father and drinks the blood from both his parents. Seeing Judas cry, the vampire decides to take him with him and burns down his home. Yet when the vampire, named Prince Rodion Zosimov, a Russian noble, arrives at his castle he wonders why he even brought Judas with him and casts him out. An old silversmith takes Judas in. When Judas grows up he confronts Rodion, shooting him in the head, only for Rodion's head to come back together; as a vampire he can't die this way. He offers Judas the opportunity to become a vampire and he accepts, then immediately backstabs Rodion by staking him in the chest. We return to the present, where Judas tells us of how he regrets his decision all these years later due to having to live as a vampire. Here the story ends, but the Chapter 1 designation makes me wonder if this will be a continuing series. This story contains several instances of real life photographs being used for certain panels.

The back cover features the one page "The Lunatic Creations of Edgar Allen Poe" by Al Hewetson (story) and Domingo Gomez (art). This provides some brief highlights of Poe stories like The Pit and the Pendulum, Murders in the Rue Morgue, Descent into the Maelstrom and The Tell-Tale Heart.