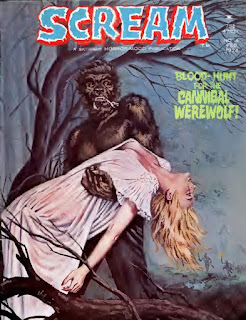 Xavier Villanova provides the cover for this issue of Scream, cover dated February 1974.

First is the latest Lady Satan story in "Satan Wants a Child" by Al Hewetson (story, credited to Howie Anderson) and Ricardo Villamonte (art). Lady Satan is brought before a demon who reveals that Satan has not yet forgiven her and seeks something else from her, a child. She is to wait in a bed for him, but awakens with Anne back in control of her body. She departs, heading back to the town of Salem and figures the only way to stop things from happening is to stab herself. It fails to kill her however and Lady Satan returns to having control of her body. She travels to be with Satan, they embrace and when Anne resumes control of her body she learns to her horror she is with Satan's child. This series continues to be rather lackluster for me, and the act of Anne and Lady Satan exchanging control of Anne's body is getting old.

Next is an adaption of Edgar Allen Poe's "The Oblong Box" with adaption by Al Hewetson and art by Maro Nava. This story tells of how our protagonist, traveling on a boat at sea sees his friend Wyatt also come on board with several servants, his wife and a large oblong box that he believes includes a painting. Wyatt's wife is quite vulgar and grotesque and Wyatt seems fit to rage and pass out. Eventually a large storm hits the ship and as it is destroyed, Wyatt chains himself to the box and sinks into the depths of the ocean. As the story concludes the captain reveals all. Wyatt's wife was in fact his servant, his real wife was dead, included in the box which was filled with salt. Our protagonist considers with horror what must have been going on with Wyatt and the box in his room at night. A pretty good Poe story; Nava's aping of Jerry Grandenetti continues including an extremely obvious swipe of a character from the story "The Adventure of the German Student" from Creepy #15.

Third is "The Skull of the Ghoul" by Al Hewetson (story) and Ferran Sostres (art). Traveling in a carriage across Barcelona is a carriage manned by a guard who is keeping a hold of a woman prisoner. When the driver of the carriage collapses dead, the woman takes the opportunity to break from her bonds and kill her guard. Feigning that she needs help, she travels into the town and is greeted by a Countess Sostres to brings her to her manse. There the countess shows our protagonist around, including showing her the skull of Dracula. Our protagonist plans to steal it and flee yet that night as she is about to do so she hears talking. It is the countess, talking to the skull! Our protagonist is taken a hold by Sostres' servants and she reveals she is a vampiress; she killed the driver of the carriage and will now drink her blood as well. Rather standard vampire fare, but Sostres' art is quite strong. For some odd reason this story is split into two parts, although the first part is a mere three pages long.

Fourth is "The Legend of the Cannibal Werewolf" by Ed Fedory (story) and Ricardo Villamonte (art). A hunter named Sir Percy shows off the stuffed werewolf he hunted in Africa. He is asked to describe how he hunted it and we see him traveling through the jungle, and being attacked by the werewolf. Returning to the present, he reveals that the werewolf wasn't seeking to kill him, but find a mate and he transforms into a werewolf himself, along with his mate slaying everyone there. We will see another werewolves in love type story a bit later on which I consider quite a bit better than this rather "eh" story.

Fifth is "The Lunatic Mummy" by Al Hewetson (story, credited to Howie Anderson) and Cesar Lopez (art). This story is Lopez's Skywald debut. A man named Emmanuel Humphrey travels through the desert, stopping to rest at an oasis. While sleeping a group of religious fanatics capture him, planning on sacrificing him. They bury him up to his head, about to let a snake kill him, but then change their mind, dig him back up and mummify his body, then bury him again. The authorities arrive and kill all the fanatics, but upon digging up Emmanual find that his body completely deteriorates. The plot of this story makes me wonder if it inspired a sequence from the first Creepshow movie where people are buried in sand up to their heads. Stephen King was reportedly a Skywald fan, so it is a possibility.

Sixth is "The Vampire Kingdom" by Al Hewetson (story) and Domingo Gomez (art). A pair of newspaper reporters search Peru, finding a half buried city, occupied by the man-bats, half man, half vampire creatures. The design of the man bats seem quite similar to a one page feature of them done all the way back in Nightmare #11.

The issue concludes with the latest in the Nosferatu series, "When the Dusk Falls... So Does Death" by Al Hewetson (story) and Zesar Lopez (art). Nosferatu ask another of his dinner guests to tell his tale, this time one with a werewolf mask. The man removes his mask, only to reveal another, iron mask underneath. The man says his name was Fernando Doma and he lived in Madrid. An eligible bachelor, he pursued a woman, Anastasia Rubio, causing her to break up with her current suitor. At the first full moon we discover that Anastasia is in fact a werewolf and upon biting Fernando turns him into one too. They pursue many victims but eventually Anastasia is killed by a cross dropped by her former suitor. Fernando transforms into a werewolf and kills him, but is taken in by the authorities who put him in an asylum and strap an iron mask around his head such that when he transforms into a werewolf, the growth of his head will crush it. As we return to the present, Fernando removes his mask revealing his mutilated crushed head. As often is the case, the Nosferatu story is the peak of the issue, with great art from Zesar. I must say though Anastasia just isn't that beautiful with her short hair, and most notably very dark circles around her eyes.