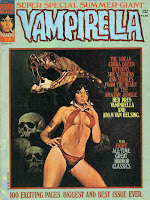 This issue of Vampirella is a special summer reprint issue, containing 7 reprint stories and 1 new one. Although my standard practice is to not cover reprint issues on this blog, I will be doing it for those issues of Vampirella that contain a new story, which this one does. The front cover is by Sanjulian. Vampi's face from this cover would be used in the top left hand corner of the cover for every issue for the remainder of the magazine's run. The back cover is by Enrich. That painting would eventually be used for the cover of Eerie 117 as well, a great many years after this issue's publication. (see previous day's post)

First is "Cobra Queen" by Esteban Maroto (art) and Don Glut (story), from issue 23. A trio of men head through the woods in search of a Cobra Queen that rules over a society of amazonesses. Along the way they keep seeing a large cobra. One of the men is soon killed by one. They finally reach the society, and meet the Cobra Queen who transforms into a giant cobra. One of the men however reveals that he too is a giant cobra, and transforms into one. The Cobra Queen and King then feast on the last remaining man.

Next is this issue's sole new story, "She Who Waits" by Jose Gonzalez (art) and Archie Goodwin (story). This story is in color. This is a continuation of the prior story, starring Vampirella and the usual cast of characters. Conrad tries to kill Vampi after seeing two holes on Adam's neck. It seems that Adam has not been attacked by Vampi though, but rather a cobra snake who brings him to the Cobra Queen. It seems that Adam killed the Cobra King, so she captures him and desires him for her new mate, planning to mutate him so he'll turn into a cobra too. Vampi and the others arrive though and are able to rescue Adam, setting the Cobra Queen aflame.

Third is "Song of a Sad-Eyed Sorceress" by Luis Garcia (art) and Don McGregor (story), from issue 18. McGregor's story is somewhat better than usual, helped tremendously by Garcia's extremely good art, but still contains his usual political nonsense. It surrounds a young woman who summons a sorceress after being dumped by a man she was seeing. The sorceress takes over her body, changes form and takes out revenge on the man by transforming into a giant snake and killing him. Only the sorceress decides to retain her body and won't give it back after the deed is done.

Fourth is "Cry of the Dhampir", a terrific vampire story by Auraleon (art) and John Jacobson (story) from issue 22. The story features a pair of vampires on the run from a 'Dhampir', a human with vampire blood who has the power to easily destroy vampires. Although the Dhampir ends up being killed when mistaken for a vampire by a mob, his twin sister, also a Dhampir gets to defeat the vampire once and for all.

Fifth is "Demon Child" by Ramon Torrents (art) and James Crawford (story), from issue 26. An old man whose an expert on the paranormal suspects that his granddaughter is actually a demon known as a Changeling, who took her place shortly after her birth. His wife passed away soon after, which he suspects is because of the demon. His daughter and son in law don't believe him, thinking that they will have him committed due to this, although he is right after all as the ending shows.

Sixth is "The Vampiress Stalks the Castle This Night" by Felix Mas (art) and Don McGregor (story), from issue 21. A fairly good story about a pair of 17 year olds who have gotten pregnant who come across a large castle occupied by a vampiress. They are luckily able to stop her and escape. Some very nice art by Mas, much of which was used within the inside covers of the Warren companion.

Seventh is "Blood Brothers" by Isidro Mones (art) and Lynn Marron (story) from issue 26. Revolutionaries in Guatemala find a religious cult which they believe possesses gold that they can use to fund the revolution. One of the revolutionaries tries to join the cult and does so by replacing a member which he had killed. Yet when he is officially brought into the cult he is eaten by the others, which is what their plans were for the man he had killed.

Last is "The Accursed!" by Jose Bea (art) and Kevin Pagan (story), from issue 23. A man wanders through a graveyard, fighting off various creatures like a werewolf, vampire bats and rats. He is here to dig up and destroy the corpse of an evil man that has been buried in the graveyard. He digs up the man and destroys it, then collapses before his father's grave.
Posted by Quiddity at 4:13 PM