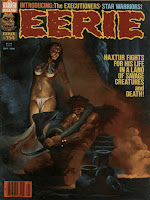 Sanjulian provides a nice cover for this issue of Eerie, cover dated September 1980.

First is "Star Warrior!" by Al Sanchez (art) and David Jacobs (story). A 31 page story that drags excessively, although its at least a tad better than the garbage from the prior issue. A man is embroiled in a big adventure to kill the brother of his lover, who he killed so she couldn't be targeted to get to him. The story also features our hero's friend, who is forced to give up everything he owns when he loses a race. Although the story has some twists in it (like the killed lover turning up alive, only to die for real), not that good a story.

The next story on the other hand, is terrific. "The Executioners" is by Carlos Giminez (art & story), and like his stories that I've already covered for 1984 on this blog, was originally printed elsewhere and reprinted here. A ship is stranded in space. The older members of the crew decide that in order to survive they need to eat one of their fellow crew members. The young cadets are targetted to be eaten, and one is chosen to be killed. Lots of anguish goes on by the one chosen, along with other members of the crew who do not want to go through with it. Eventually though the boy is killed, but mere seconds later, help arrives, making it all meaningless.

The issue concludes with the latest Haxtur story, "Panthers, Wolves and Death!" by Victor de la Fuente (story & art). Haxtur encounters a woman with a panther for a pet whom he helps. He then later is captured by a clan of wolf men, but manages to defeat their leader, scaring them away.
Posted by Quiddity at 11:36 AM