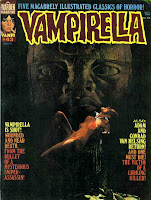 A very memorable issue of Vampirella, as you'll soon find out. It is cover dated June 1975. The cover is by Ribas, which is the only work he ever provided for Warren. An interesting cover, but unfortunately a tad too dark. Vampirella is obviously in anguish, but its hard to tell what exactly is going on. Jose Gonzalez provides a one page intro from Vampi which features not only Vampi, but also Adam, Conrad, Pendragon, Tristan and The Conjuress.

First is "Vampirella", a rare Vampirella story which doesn't have a seperate title. Art is by Jose Gonzalez and story is by Bill Dubay. A very significant Vampirella story that sets the stage for many stories coming up over the next half a dozen issues or so. Vampirella and Pendragon return to America, only to immediately be apprehended by the police, then shot. Adam and Conrad believe that the shooting originates from Pendragon's daughter, and he is correct. Due to the death of her husband by Vampirella (see issue 24 and 25), she is seeking revenge by framing Vampi and killing those she cares about. Adam manages to help Vampirella escape from the hospital while she recovers, but Conrad is promptly shot himself when he goes to see Pendragon. For a series that usually was a complete waste of time, this is quite the good story, which is continued in the next issue.

Second is one of the best Warren stories ever, "The Wolves At Wars End". Art is by Luis Garcia (miscredited to Jose Garcia) and story is by Victor Mora (uncredited) and Budd Lewis. A shame that they screwed up the credits so bad on such a great story. I rank this story as my #3 Warren story of all time, the Warren Companion ranks it as the #2 Warren story of all time. On its own makes this issue worth owning. This story, along with four others printed by Warren in 1975 by Garcia and Mora were originally printed in Europe in the magazine Pilote (and perhaps other magazines?). Warren modified the artwork somewhat and translated/rewrote the stories, frequently missing Mora on the credits entirely. That gaffe aside, these were a tremendous benefit to Warren and marked some of the best stories printed that year. Anyway, on to the story. A soldier returns from the Crusades to find his hometown ravaged by the plague. Returning to his home, he finds it boarded up by a priest. His sister locked inside, the soldier breaks her out and attacks the priest, then flees. The priest, believing his sister to be a sorceress sends men after them. All that keeps the soldier going is his quest to find his lover Eleanor, who he has not seen in many years. He and his sister eventually come upon the castle where her family lived and he finds her alive, exactly as she was before. This is nothing more than a spell cast by his sister however, who actually is a sorceress. When their pursuers catch up to them and kill her, the spell fades, and our protagonist sees the truth, Eleanor's grave, as she too has died. Distraut, the soldier rides back off into the woods where the wolves of war that he has been imagining overcome him. Terrific, terrific story, and Garcia's artwork is absolutely tremendous. I'd rate it the best artwork to ever appear in a Warren magazine, but Garcia outdoes himself a couple of issues later with the story "Janis".

Third is "The Easter Bunny Murders" by Ramon Torrents (art) and Gerry Boudreau (story). A rather odd concept in this story, featuring a were-bunny. Experiments involving animal blood are run on a former convict who escapes and uses heroin. When the heroin enters his system it causes a chain reaction that causes him to transform into a murderous bunny man! Has to been seen to be believed, believe me. In the end the police are able to find the bunny man and kill him.

Fourth is "Cult of the Dead" by Isidro Mones (art) and Gerry Boudreau (story). This story features a murder investigation where multiple people are discovered with their brains removed. Investigation reveals that years before a cult would eat the brains of others, thinking that they would gain the abilities of that person. It is happening in the modern day, led by a school professor who leads three of his students to eat the brains of a famous actor, artist and politician. The professor then kills them and eats all their brains, but is killed by the police immediately afterward.

Last is "The Last Testament of Angus Crow!" by Fernando Fernandez (story & art). A sore dissappointment for what would be Fernandez's last art job in Vampirella (he would write one more story which would appear in issue 57 and had 3 more stories which would appear in Eerie many years later, although all were reprints or unused inventory stories). Angus Crow of the story is a man who has been convinced throughout his entire life that aliens have been talking to him. He also becomes convinced that enemy soldiers faced during the war were aliens as well. Crow eventually ends up in a mental institution where he passes away. Doctors examining his death discover that he was actually half an alien himself. One of many Fernandez stories featuring aliens in some way, it is nice at the very least to know that he didn't bring the alien angle in out of nowhere on the last couple of pages, which he had done in multiple stories before. In any case though this is the weakest story from those Fernandez contributed to Vampirella in the mid 1970s.

The back cover previews multiple upcoming stories, including one titled "1842" which never ended up appearing.
Posted by Quiddity at 7:04 PM