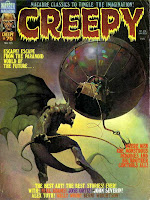 Ken Kelly provides the cover for this issue of Creepy, dated November 1975. Berni Wrightson provides a one page intro from Uncle Creepy. An amazing issue, one of Creepy's best single issues ever.

First is "The Escape Chronicle" by Jose Ortiz (art) and Budd Lewis (story). This story takes place in a 1984-esque future. A man, Bernard, meets Charlie, a man who is completely unlike anyone else, refusing to act in the way that society demands. Charlie convinces Bernard to come to his side and they plot to escape using a hot air balloon. The day it finally happens however Bernard is pursued by law enforcement and falls off the balloon just as Charlie is escaping. A fairly good story, that was included in the Warren Companion's top 25 list. A sequel was made in issue 80 that wrapped things up on a happier note.

Second is "Phantom of Pleasure Island" by Alex Toth (art) and Gerry Boudreau (story). This story is a murder mystery taking place in an amusement park where a mysterious sniper has killed multiple people. One of the suspect is killed while the other one agrees to sell his rival amusement park, removing him as a suspect. The killer ends up being the wife of the park owner, who wanted him to pay more attention to her than the park, and thought that her murder spree would accomplish that goal.

Third is "Snow" by Rich Buckler & Wally Wood (art) and Bruce Bezaire (story). This story takes place in the ruins of a wintery city. A man meets a boy in an abandoned building whose parents are dead. They are attacked by a man who wants to eat them, but they kill him instead, then plan to use him for food.

Fourth is "Death Expression" by John Severin (art) and Jim Stenstrum (story). A man in a prison tells a story of a revolution he was part of in South America. His cause was helped by a major who suddenly arrived and took charge, quickly bringing their group to power. Once in power, executions of people continue for weeks and months and a mysterious council appears. When our protagonist refuses to murder the former dictator, the Major plans to have him killed. This results in a struggle between our protagonist and him where he pulls of the Major's mask, revealing that he is an alien cochroach! The aliens started the revolution and are plotting to take over the entire world. Back in the prison, our protagonist thinks one of the guard is an alien as well and attacks him, falling to his death.

The issue concludes with "Thrillkill" by Neal Adams (art, his final Warren appearance) and Jim Stenstrum (story). A truly great story, and arguably the most famous Warren story of all time, being ranked #1 overall as best Warren story in the Warren Companion. A young man with a sniper rifle shoots random people from the top of a building and is eventually killed by the police. While the artwork shows these events taking place a priest who knew the young man as a boy talks to a reporter, trying to explain why this happened.
Posted by Quiddity at 8:09 PM