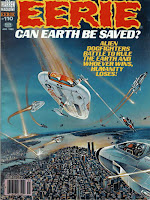 Jim Laurier provides the sci-fi themed cover of this issue of Eerie. A very good issue, standing out among those issues of Eerie around this time. In fact given how deeply Eerie declined, this might by the last really good issue of the magazine left. This was Louise Jones's final issue as editor.

First is "Blood on Black Satin" by Paul Gulacy (art) and Doug Moench (story). Our protagonist is attacked after finding the body of Uncle Jock but is saved by Heather. They travel to the basement of an old courthouse where our heroes find the skeletal remains of Whatley's followers. Seconds later Whatley himself appears. This series would be concluded in the next issue.

Second is the finale for "Beastworld" by Pablo Marcos (art) and Bruce Jones (story). In this story Tyler and Thomas have their last confrontation. Ruth falls to her death accidently after being used as bait by Tyler. Tyler and Thomas fight each other and Monica kills Tyler just as he's about to kill Thomas. The series ends with Tyler and Monica sleeping with each other. Overall, this 6 part story probably would have worked better in no more than 2 parts. A big waste of time and a huge dissappointment from Bruce Jones.

Third is "Francois", the finale to "The Open Sky" by Jose Ortiz (art) and Bob Toomey (story). This story features Francois, the evil assassin that Moonshadow was coming after. Francois travels in a hot air balloon which crashes into the sea. He is saved by some dolphins which bring him to an island where he meets the Grim Reaper, as well as Moonshadow and Arianne. Upon fighting, Francois discovers that both he and Arianne are dead. Moonshadow, still alive, is able to leave. A pretty good finale to this series, which was missing for a while.

Fourth is "Firefly/Starfight" by Auraleon (art) and Budd Lewis (story). This story features an ordinary man who witnesses spaceships battling for control of Earth. Convinced that the aliens will control the Earth, he decides to kill himself. A slow paced, but okay story.

Last is "The Rainmaker" by Leo Duranona (art) and Michael Fleisher (story). During a heavy drought, a con man fools a town into giving him $500, saying that its for materials to bring rain. While traveling to the next town he comes across a cabin where a man tells him he's a rainmaker as well, and makes it happen by sacrificing the conman to the Gods by chopping his head in with an axe.
Posted by Quiddity at 4:14 PM

Your Beastworld critique was a spoiler. However thanks for blogging about Eerie in general.