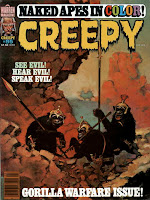 This issue is an apes special issue. It is cover dated February 1978. All stories within feature apes in some manner. Doing themed issues like this based on the cover was a very common Warren theme throughout the years. Two stories that were clearly intended to appear in this issue also appeared in Creepy 99 and Eerie 92. Don Maitz provides the cover.

First is "The Star Saga of Sirius Sam" by John Severin (art) and Nicola Cuti (story). Two men come to meet Sam of the title to head to an alien planet and steal a gem which they hope to use to keep alive a woman who is the wife of one of them and the sister of the other. They head to the planet, which is ruled by chimps. They find the gem, but discover it is only made of glass, as the real one was taken long ago. The glass substitute is destroyed while they are there. They are able to escape safely by using the glass eye of one of the men to replace the destroyed substitute however.

Second is "The Laughing Man" by Berni Wrightson (art) and Bruce Jones (story). The best story of the issue, it features a man found by a doctor in the African jungles laughing maniacally. With some drugs the man calms down and tells how he and his business partner headed to the African jungles in an attempt to find intelligent chimps. They catch one dead, and our protagonist's business partner skins the creature and uses it as a costume to attract another one. He vanishes after a while and turns up later, but it ends up he is actually an ape, wearing the dead partner's skin as a costume! A terrific story, unfortunately it would be Wrightson's last Warren story.

Third is this issue's color story, "Murder on the Vine" by Esteban Maroto (art) and Cary Bates (story). In this story a young woman and a boy kill Tarzan in order to steal his treasure. Meanwhile the animals of the jungle, aware of whats going on, take steps to arm themselves and fight back, led by a chimp friend of Tarzan. The murderers are caught and dumped into a tar pit. Some so-so color on this story, nowhere as good as it has been in previous issues.

Fourth is "The Empire of Chim-Pan-Zee" by Luis Bermejo (art) and Nicola Cuti (story). The empire fights neanderthals, but is hopelessly outnumbered and is losing ground fast. A few of the chimps find modern humans nearby who have gone back in time and have powerful rockets and other devices. They hope to use them by taking the button that activates them, but find it useless on its own and are wiped out by the neanderthals.

Fifth is "The Oasis Inn" by Jose Ortiz (art) and Bob Toomey (story). This issue's weakest story by far, it features ape soldiers, one of whom is after a woman whose going out with a gorilla officer. They go through various escapades and all end up friends at the end.

Last is "The Old Ways" by Leo Duranona (art) and Roger McKenzie (story). This story takes place in a post apocalyptic world where talking apes reign supreme. The sole remaining living human fights them off, shooting at them. Eventually one of them finds a gun and confronts him, killing him.
Posted by Quiddity at 5:49 PM