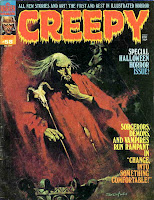 Sanjulian provides the cover for this issue of Creepy, cover dated December 1973. Bill Dubay and Vicente Alcazar provide the art for the two page frontis "The Old School" while Steve Skeates provides the script.

First is "Change... Into Something Comfortable" by Richard Corben (art) and Doug Moench (story). A werewolf runs around on Halloween, enjoying himself by killing trick or treaters, gang members, and pretty much anyone else who he encounters. He eventually comes across a mansion which he attacks, only to find that the inhabitants are fellow monsters like him, part of the freak show he used to work for. The monsters then make him their dinner! A strong way to start off the issue.

Second is "An Excuse for Violence" by Adolfo Abellan (art) and Don McGregor (story). This story features a vampire on a college campus whose attacks are contributing to a tough racial situation between white and black people. Oddly enough the vampire is a black man who transforms into a white one after becoming a vampire. Not that great a story from a story or art standpoint.

Third is "Shriek Well Before Dying!" by Jose Bea (art) and W. Eaton (story). A con artist marries a young woman because he wants to bump off her father and get his money. He eventually is able to get the father to have a heart attack and die, but the father comes back from the grave to get his revenge. In the end the daughter goes crazy and lives with his corpse, whom she keeps in her house.

Fourth is "Soul and Shadow" by Reed Crandall (art, his final Warren appearance) and Gardner Fox (story). A warrior sneaks into a tomb to find a treasure, finding a sleeping woman there. She awakens and he fights off a group of demons. Soon afterwards however a shadow comes after him and kills him. It ends up the whole thing was a ruse to get him to kill the demons, which the woman could not.

Last is "The Waking Nightmare!" by Isidro Mones (art) and Don McGregor (story). A Gasp! interesting story by McGregor for once, featuring an outbreak that occurs that causes some to go on a murderous rage and others to just pass out. The story does contain McGregor's political ramblings as usual, but not enough to wreck a fairly good story.
Posted by Quiddity at 5:34 PM

The first issue of Creepy I ever purchased. Fall of '73, 9 years old, if you can imagine. If my parents only knew. I spent hours copying Rich Corben's monsters in the last panel of his story. Ah, the good old days. . .