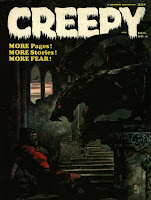 First is "The Thing in the Pit!" by Gray Morrow (art) and Larry Ivie (story). An excellent story, this features a man whose car crashes in the woods. He is helped by a pair of blind freaks who bring him to their house and warn him of 'The Thing in the Pit'. Curious, he finds 'The Thing' to be a beautiful, normal looking woman. The freaks throw him in the pit but when he tries to get out using some rope, he realizes its actually the tentacles of the Thing, which strangles him.

Second is "Thumbs Down!" by Al Williamson (art) and Anne T. Murphy (story). Murphy was Archie Goodwin's wife. This is her sole story though for Warren. The story features a crooked arena games master who has his top gladiator killed only for him to come back from the dead to take revenge. This story would probably be reprinted by Warren over the years more than any other story.

Third is "Adam Link in Business!" by Joe Orlando (art) and Otto Binder (story). Adam is about to be executed for the murder of Dr. Link, but at the last second his friend Jack Hall gets him saved because of a witness changing her story. Adam goes into business as a scientific consultant, making lots of money. He takes on a secretary, Kay, who is Jack's girlfriend. Jack wants to marry her but she refuses, as she's in love with Adam! Adam flees from society to avoid her.

Fourth is "The Cask of Amontillado!" by Reed Crandall (art) and Archie Goodwin (story), an adaption of the classic Poe story. The story features a man who encloses a colleague of his in a brick tomb. Goodwin adds a new ending to the story, where the protagonist, now an old man, returns to the scene of the crime and is killed when the chamber floods and the corpse of his colleague pulls him under water.

Fifth is "The Stalkers" by Alex Toth (art) and Archie Goodwin (story). A man goes to a psychologist, telling him of these bad dreams he is having where he is confronted by aliens that look like prune faced people. The psychologist reveals that he's an alien himself, and that our protagonist is one as well, who had been on Earth in human form so long that he forgot who he was.

Sixth is "Abominable Snowman!" by John Severin (art) and Bill Pearson (story). A group of four explorers search for adominable snowmen in the himalyas. Soon two of the men are dead. The other two set explosions, which go off as some of the creatures come. One of the men in their tent thinks he's safe, only to find that one is in the tent with him!

Last is "Gargoyle" by Angelo Torres (art) and Archie Goodwin & Roy Krenkel (story). A man seeks to find the power to turn stone into gold. He meets a mysterious dwarf who is the responsible for the deaths of multiple powerful men. He gets the dwarf drunk, who reveals how to make gold out of stone, so he pours it on a stone gargoyle. Only the dwarf actually told him how to turn the stone into life, and the gargoyle kills him!
Posted by Quiddity at 10:06 PM