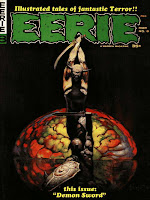 For the first time in a while I'll be covering an older issue of Eerie, this one from March 1967. The cover is by Frank Frazetta, featuring the interior story Demon Sword. The frontis for this issue is "Eerie's Monster Gallery No. 7 - Demon!" by Angelo Torres.

First is "Oversight!" by Eugene Colan (art) and Archie Goodwin (story). Like many of the Colan/Goodwin stories in early Eerie, probably the best story in the issue. A man being given glasses for the first time realizes that it gives him the ability to see monsters that are masquerading as humans. He follows his doctor to a graveyard where he witnesses a group of the monsters plotting to kill him since they know he has the magic glasses. After they kill the doctor for screwing up, our hero hides there, only to be confronted by one of the creatures, which he kills. He returns to his apartment where he hides out, and lets some police in when they come by. Only it ends up the police are monsters themselves, as he accidently mixed up his glasses with those of his dead doctor's during the struggle and isn't able to tell who they are.

Second is "Dark Rider" by John Severin (art) and Archie Goodwin (story). A trio of horsemen in the snowy mountains are followed by a mysterious rider in the distance. They die one by one until only one remains. He shoots at the rider, which causes an avalanche that kills him. The rider reveals himself to be Death.

Third is "Type Cast" by Jerry Grandenetti (art) and Archie Goodwin (story). A stage actor gets upset with being typecast into the role of a killer or monster in many horror movies. In order to draw inspiration, he becomes a killer. Eventually he goes really crazy and kills his agent too. Years later he is let out of the looney bin accidently and returns to his crazy ways.

Fourth is "The Day After Doomsday!" by Dan Adkins (art) and Archie Goodwin (story). A man finds himself in a post-apocalyptic world, and confronts multiple mutated beasts which he fights off. Eventually he finds normal humans whom he stays with, only to find that they are cannibals, who eat him! Some very nice art by Adkins here, perhaps his best work for Warren.

Fifth is "The Covered Bridge!" by Bob Jenney (art) and Archie Goodwin (story). Set in colonial times, a farmer is hung by some soldiers, who ignore his recommendation that they not go through a nearby covered bridge. The soldiers ignore his advice and send some men there, but each who goes through the bridge dissappears. Eventually the leader goes in, with a rope around him so his subordinate can pull him out. He discovers the truth, that the bridge actually goes to another dimension, where the dead are. The dead farmer himself is discovered to be grabbing on to his body.

Sixth is "Wolf Bait!" by Rocco Mastroserio (art) and Archie Goodwin & Buddy Saunders(story, the credits say based on a story written by Saunders). A series of werewolf murders occur in a small town. The local sheriff is upset at a girl he likes, as she instead plans to be wed to a chemist. The chemist tries to create a formula which can kill the werewolf. The sheriff, who ends up being the werewolf kills him, but it ends up that he ingested a poison, which results in him dying soon afterwards.

Last is the cover story "Demon Sword!" by Steve Ditko (art) and Archie Goodwin (story). A demon sword is recovered as part of an archeological find. Soon after however murders start occuring. Two of the archeologists witness a battle between the demon using the sword and a warrior, and when the demon is defeated so too is one of the archeologists. The other ponders whether to destroy the powerful but dangerous demon sword.
Posted by Quiddity at 7:26 PM