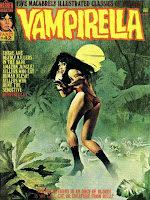 First is "The Mountain of Skulls" by Jose Gonzalez (art) and Mike Butterworth (story, as Flaxman Loew). Butterworth's long run as Vampi's writer ends with this story, with Dubay taking over the reigns as writer in the next issue. In this story a plane that Vampi and Pendragon are on crashes on an island where they and the survivors are locked up by savages. Vampirella escapes and comes across some other men on the island who aren't really interesting in saving anyone. When they find a pile of golden skulls, Vampi takes the opportunity to attack them. Everyone is released soon after.

Second is "Around the Corner... Just Beyond Eternity!" by Luis Garcia (art) and Victor Mora & Gerry Boudreau (story, Mora uncredited). As I discussed in my review of issue 43, this story was originally printed in Europe and was reprinted here. This story features an englishman who crashes during the war near a mansion. He is brought inside and held there by an old german woman, but a young woman helps him escape. He returns years later and finds that she had died years before and that she must have helped him out since he looked just like her brother, who also died in the war. A very good story that I'm probably not doing enough justice to with this quick summary.

Third is "Laugh, Clown, Laugh!" by Ramon Torrents (art, miscredited to Esteban Maroto) and Shelly Leferman (story). Leferman worked as a letterer for Warren and only ended up writing this single story. It is about an extremely popular clown who refuses to take off his makeup. When a senator gets involved, he is finally forced to do so, revealing that he is a hideous monster. His career as a clown is finished, but he ends up helping the circus in another way by becoming part of the freak show.

Fourth is "Straw on the Wind", the start of Pantha's second series. Pantha had been absent since her first series ended in issue 33. She returns for a second series, although it only lasted 2 parts. Art is by Auraleon, while Budd Lewis takes over the script from Pantha's original writer, Steve Skeates. In this story Pantha is fired from her job as a stripper but immediately gets hired at a rival strip club. When a fellow stipper harasses her, Pantha naturally turns into her panther self and attacks her. She later meets Jack Kimble, an older man whom she falls in love with and lives with. John is assaulted by a mugger as this part ends. This series would skip an issue and come back in issue 44.

Last is "The Whitfield Contract" by Fernando Fernandez (story & art). A black assassin, John Gamble, has some personal turmoil over having to kill Whitfield, a good friend of his. Gamble has the special ability to kill people simply by willing it to happen. He is upset enough over the assassination to consider quitting the business, particularly after being ordered to kill a doctor that investigated his death. When he confronts his superiors to quit, he reveals the truth, that he is actually an alien being and that he'll be returning to his home planet, to come at a later time and kill them. What was a very good story descends into total lunacy on the final two pages with the alien twist.
Posted by Quiddity at 7:21 AM