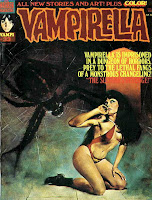 The cover to this issue by Enrich features Vampirella under attack by a giant spider. This issue is cover dated May 1974.The two page feature "The Believer" by Jeff Jones & Berni Wrightson is on the front and back inside covers.

First is "Vampirella and the Sultana's Revenge!" by Jose Gonzalez (art) and Mike Butterworth (story, as Flaxman Loew). Vampirella and Pendragon are invited by a Sultana to perform. It ends up the Sultana is Droga, Kruger's girlfriend from the previous issue's story. She is cheating on her husband, but he has agreed to never harm her no matter what she does. She plans to have Vampirella thrown to the beast that lives in their castle, but Vampirella ends up killing it. The Sultana is caught cheating, so her husband punishes her by force feeding her until she becomes grotesquely fat. Some amazing, sexy artwork on this story, earning Gonzalez a Warren award for best art on a story for 1974.

Second is the finale to the first Pantha series, "Childhood Haunt!" by Auraleon (art) and Steve Skeates (story). Pantha heads to an orphanage to find information on her past. Before, she meets a man, Jason whom she has sex with. When the head of the orphanage refuses to give her the info she wants, she breaks in and sees him abusing the children. She attacks him in her panther form, but when Jason comes to protect the children, she ends up killing him too. A sad end, but a good one to Pantha's first series.

Third is "Top to Bottom" by Richard Corben (art) and Jack Butterworth (story). A very good story reminiscent of the Hellraiser movies. A man finds a mysterious blue cube in a pawn shop with lights inside that travel from the top to bottom. He suddenly finds himself inside the cube, and time starts traveling very quickly when he dozes off. Eventually the cube starts talking to him, telling him its a game. He plays for years and years, never winning, until he is an old man. The cube then tells him that his behavior shaped the entire world while playing it, and that he could have brought peace to mankind, but his greed brought about different events. Just then he is killed by a pair of crooks who plan to use the cubes themselves, while on drugs. A very good story, one thats quite unique compared to the other ones published by Warren.

Fourth is "...Number 37 is Missing!" by Isidro Mones (art) and Budd Lewis (story). This story surrounds a murder mystery where painting with monsters start appearing. Other paintings show up without the monsters at the murder scenes. It ends up that the monsters in the paintings are alive, and causing the murders. This results in a terrifying end for the newspaper reporter investigating the case.

The issue concludes with "Barfly!" by Adolfo Abellan (art) and John Jacobson (story). This issue surrounds a man who comes back from Asia with a new wife. It soon becomes apparant that she is a vampire, and her husband soon dies. She came to America in the first place for her husband's friend, whom she wants to become a vampire with him. While he refuses, at the end of the story he ends up attacking a friend of his in the bar and fleeing. Abellan's sole appearance in Vampirella (he appeared predominantly in Creepy) isn't any better than his usual work, which always paled compared to the other Spanish artists working for Warren.
Posted by Quiddity at 5:17 AM