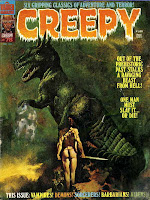 Sanjulian provides the cover for this issue of Creepy, Bill Dubay's last during his original run as editor. It is cover dated March 1976.

First is "The Horseman" by Miguel Quesada (art) and Bruce Bezaire (story). Quesada was an artist who worked with the Valencia studio with Jose Ortiz, Luis Bermejo and Leopold Sanchez. While those three became very prolific artists for Warren, this ended up being Quesada's only story. It features a centaur like horseman who encounters a Canadian soldier who is afraid of the battlefield. When other soldiers come and try to kill him, the horseman kills them all. The two say their farewells soon after.

Second is "Unreal!" by Alex Toth (story & art). This story features an actor named 'Baba' Boone who does a lot of stunts, but is extremely quiet. As the story ends it ends up that is the case because he is a robot. A good story, though a tad predictable.

Third is "Creeps" by John Severin & Wally Wood (art) and Archie Goodwin (story). This story features an accountant who is bugged by homeless people and the more destitute in society, calling them "Creeps". Eventually it becomes an obsession to him and he starts killing them. It goes even further when he thinks his mother is a Creep herself and kills her. Only this time someone sees it, so he has to flee and hide on the streets. As the days go by he takes on the appearance of a homeless person himself, then ends up killing himself when he sees his reflection. Very good story from Goodwin and an interesting art job from Wood and Severin.

Fourth is "Lord of Lazarus Castle" by Jorge Moliterni (art, miscredited to Claude Moliterni) and Gerry Boudreau & Carl Wessler (story). This story features a couple that kills people who visit an old castle they occupy. They then take the corpses and provide it to a cannibal, who pays them for them. When summer comes however it is too popular a place and they can't kill anyone. This angers the cannibal, who ends up eating one of them.

Fifth is "The Nature of the Beast" by Martin Salvador (art) and Budd Lewis (story). This odd story features a man with visions of the past long ago, as a caveman. Years pass into the present and we witness the future as well. An odd story, although a fairly good art job by Salvador.

Last is "God of Fear" by Vicente Alcazar (art) and Jeff Rovin (story). Very good art by Alcazar, resembling Luis Garcia's work. An archeologist of the Smithsonian discovers ancient artifacts referencing a God, Uturuncu. When he returns, he gets upset when his colleague tries to take all the credit and utters a chant that turns him into Uturuncu. He then goes on a rampage around the Washington Monument. He eventually turns back into his human self, at which point the story ends very abruptly.
Posted by Quiddity at 3:49 PM