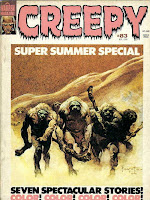 This issue of Creepy is cover dated October 1976. It features the first instance in Warren history where a reprint cover was used, originally from Creepy 15. Apparantely what happened was that Richard Corben was working on a cover for his interior story "In Deep", but it didn't get finished in time, so this reprint was used instead. That cover would eventually be used for Creepy 101. Berni Wrightson provides a one page intro from Uncle Creepy.

First is "The Strange, Incurable Haunting of Phineas Boggs" by John Severin (art) and Bill Dubay (story). This story features an author who moves into a house that appears to be haunted by the ghost of an old actor, Phineas Boggs. Boggs was a star in the silent era, but the talking era forced him to because a stuntman. His ghost causes robin hood, a knight and a horseman to appear, but none end up actually harming our protagonist and it actually ends up helping the author with his work.

Next is "Process of Elimination" by Russ Heath (art) and Bruce Jones (story). A man comes home to see his family, appearing quite nervous about what he's soon going to do. After dinner, he murders his wife, then kills his two young children too. He then sleeps with a coworker of his, and kills her when she asks him too. The final page reveals why he was doing this, as a nuclear holocaust occurs. Certainly one of the biggest shock endings in Warren history, worthy enough of an entry in the Warren companion's top 25 stories list.

Third is "Country Pie" by Berni Wrightson & Carmine Infantino (art) and Bruce Jones (story). This was Infantino's first Warren story. He had been publisher over at DC, but was fired, and came here to Warren afterwards. Warren's fastest artist, he very quickly turned out a ton of stories, although it should be noted that he generally did the pencils only which is part of the reason why he finished things so fast. This story features a psychic who assists the police in catching a killer. At the same time a middle aged man picks up a teenage girl and her younger brother, who ends up being the killer. They are able to save the man before the two of them kill him.

Fourth is "In Deep" by Richard Corben (art) and Bruce Jones (story). This story tells of a husband and wife whose yacht sinks. The two of them are stranded in the water with just an inner tube to keep them afloat. Over the night the wife drowns, leaving the husband on his own. To his horror seagulls and soon sharks arrive trying to eat her corpse. He fights them off as best he can, but can't stop them all. When he's finally rescued all thats left is her heart, which he grasps tightly in his hands. An extremely good story, one of Creepy's best ever, with some extremely good color artwork.

Sixth is "Now You See It..." by Al Williamson (art) and Bruce Jones (story). This story was originally intended for the Marvel science fiction magazine "Unknown Worlds of Science Fiction" but ended up appearing here instead since that magazine was cancelled. It features a man who constantly brings himself and his wife to fake prehistoric realms using a virtual reality device. She dislikes it intensely, so he brings her some place for real which still fails to convince her, and that ends up being fake too. She's happy enough with it being a fake that she finally grows warm to using the device. The main character's appearance is quite obviously based on Williamson himself.

Last is "The Last Superhero" by Carmine Infantino (art) and Cary Bates (story). This story is unique in that it was the sole story Infantino drew for Warren where there wasn't an inking job by someone else. Its kind of hard to be able to tell for sure, but I believe that this story is pencil only. It features a superhero in a society where being a superhero is illegal. Eventually he is surrounded in the sky and apparantely destroyed. Yes, Infantino was a hero expert with his experience at DC, but I question why this completely non-horror story appears here in Creepy.
Posted by Quiddity at 8:41 AM

Just purchased this one. Intrigued to first read and then return to your post.