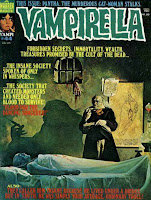 This issue of Vampirella features the rarist of rarities, a Vampi cover that does not feature Vampirella. This issue is cover dated August 1975. Neal Adams provides the frontis, featuring Vampi and an entity known as the 'Sandman'.

First is "Blood for the Dancing Sorcerer" by Jose Gonzalez (art) and Bill Dubay & Gerry Boudreau (story). This story continues from the epic prior issue story only slightly, with most of the story told in flashbacks. While Adam helps out the severly injured Vampi, she flashes back to a time where she and Pendragon did some traveling near the border and got involved with some men who stole some blood from a blood bank as part of a ceremony. Eventually things go all wrong for the culprits and Vampi goes on one of her bloodthirsty rampages.

Second is "Love Strip" by Luis Garcia and Carlos Giminez (art, Giminzez uncredited) and Victor Mora & Gerry Boudreau (story). An interesting story by Mora and Boudreau that was ranked as one of Warren's top 25 stories of all time in the Warren Companion. Garcia provides the majority of the artwork while the uncredited Giminez provides the comic strip art done by the main character. The story features a romance comic artist who is driven to despair by his hatred of the work, and things get even worse for him when he realizes that his girlfriend is having an affair with his best friend, the writer of the strip. The artist decides to end it all and poison himself. Mora and Garcia would create a similar themed work, "Nova II" years later, which would be printed in Heavy Metal magazine. The main character of the strip bears a striking resemblence to a character named 'Slaughter' that appeared in the series Exterminator One in Eerie around roughly the same time, including multiple panels that are obvious swipes of whichever was the original. Because this story is a reprint and I'm not aware of when it was originally printed, I'm not sure who ripped off who.

Third is "Troll" by Ramon Torrents (art) and Bruce Bezaire (story). This story features a man who was interested in gymnastings and acting while growing up rather than more manly things. When he grows up and is cut off by his parents, he decides to don a costume and become a troll that lives on a bridge, requesting tolls from the drivers who pass by. Although it is taken in jest at first, eventually someone gets hurt and the police get involved, and he ends up getting shot the day that he is about to stop.

Last is Pantha in "Changeling" by Auraleon (art) and Budd Lewis (story). Pantha is raped by a mysterious black man, then heads to Egypt to get away from things, where she becomes the assistant of an archaeologist. When they head to the dig site, they are betrayed by one of their comrades and most are killed, Pantha turns into her panther form to save herself and her colleague, and comes across a buried flying saucer. This would be Pantha's last solo story for many years until her script was brought back towards the end of Warren's life. That said, this storyline would be resolved in the issue length Vampi/Pantha crossover in issue 50.
Posted by Quiddity at 8:23 PM