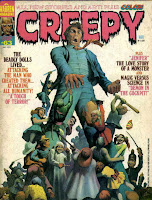 Not that good an issue of Creepy, quite a disappointment considering the era its from. This issue is dated July 1974. The cover is by Ken Kelly featuring murderous dolls attacking a man. A rather bad job of perspective by Kelly, as the man's legs appear far too big for a normal human.

First is "Jenifer" by Berni Wrightson (art) and Bruce Jones (story). One of Warren's best ever stories, and notable for being Bruce Jones's only story during Bill Dubay's era. He would eventually become a very prolific writer for Warren while Louise Jones was editor. A man hunting in the woods one day rescues a girl from being killed. The girl, called Jenifer has the ugliest face imaginable, but he becomes obsessed with her, and adopts her. His family hates her and eventually leave him after she scares them off. He then does what he can to get rid of her, such as having a freak show owner come to take her, but Jenifer simply kills the man and shoves his corpse in the fridge. Eventually he brings her out into the woods to kill her, only to be killed by someone wandering by, much like what happened at the start of the story.

Second is the cover story "A Touch of Terror" by Adolfo Abellan (art) and Rich Margopoulos (story). This story features an investigation of a security guard at a warehouse. The owner of the place is in argument with the person conducting the investigation, as the guard was hired without his consent. The owner is in charge of little toy dolls called Nymatoids, which he uses to kill the investigator. He thinks he'll be able to rule the world with them, but the Nymatoids aren't actually controlled by him, but act on their own, and eventually kill him too.

Third is "...A Ghost of A Chance" by Vicente Alcazar (art) and T. Casey Brennan (story). Brennan's final Warren story is pretty good, mostly thanks to some good Alcazar art. A man heads into a haunted mansion because it is rumored a treasure is inside. In the mansion he is confronted by the ghost of the man who lived there, who gives him his treasure, a coffin. It ends up that the man is turned into a vampire, so that certainly was a sensical gift for him.

Fourth is "Demon in the Cockpit", this issue's color story, by Richard Corben (art) and Rich Margopoulos (story). The United States government works on their latest weapon to defeat the communists - summoning a demon from hell which they successfully are able to do. Unfortunately for them, the communists have the same idea and use their own demon to attack.

Fifth is "Fishbait" by Leo Summers (art) and Larry Herndon (story). A man on a yacht is very jealous of a competitor who won over a woman he liked. When the ship mysteriously crashes into something, they find themselves in shark infested water. Eventually it is just our protagonist and his competitor left, using some drift wood. When a ship approaches, our protagonist fights off his competitor to make it to it... but it is not a ship but actually a giant shark, the entity which destroyed the yacht in the first place.

Last is "The Clones!" by Jose Gual (art) and Martin Pasko (story). Probably the single worst story of Bill Dubay's first run as editor (although Gual's art is good). This story features a hospital where clones of criminals have been developed that are used so that their organs can be used to give to other people. One of the clones comes to life and goes on a rampage, taking back his organs that were taken from him. He then returns to the hospital, including a ridiculous sequence where he runs amok with a machine gun, and takes back his final organ from the doctor that developed him. In a nonsensical final twist, the clone reveals he is a cannibal, and that he has been eating all the organs he took back.
Posted by Quiddity at 7:04 PM