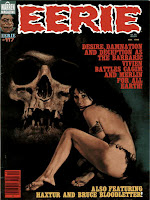 While this issue wouldn't have been anything terrific during Eerie's hey day in the mid 1970s, for an issue of this era, this issue is simply amazing. Head and shoulders above anything we've seen from the last number of issues. The cover is a terrific one from Enrich, although admittingly its a reprint from the back cover of Vampirella 37. It is cover dated December 1980.

First is the issue's only real sore point, "City of Fire", the second story in the Cagim series. Art is by E.R. Cruz and story is by Budd Lewis. This story continues from the prior issue, where Merlin and his younger self, called Ambrose fought the evil sorceress Vivien. Pretty much the same happens in this issue, with King Arthur also making an appearance. Ambrose becomes convinced that he has cast a spell that turns all normal people around him into statues, although its actually of Vivien's doing. By the end of the story Merlin has died and Ambrose dawns a very ugly superhero costume, the one he wore in the last issue.

Second is "His Brother's Keeper!" with art by Neil McFeeters (in his sole Warren appearance) and story by Jim Stenstrum. This story features a man who helps his brother escape from a military asylum. The two of them end up crashing in a bizarre landscape. Our protagonist wanders off on his own for a while, and is confronted by a hideous monster which he kills. But it ends up that the monster was his brother, and that he was crazy as well. While wondering through the woods later a monster shows up, this time for real.

Third is "Bruce Bloodletter" in "The Jalopy Scam" by Fernando Fernandez (art) and Cary Bates (story). The first Bloodletter story appeared back in Eerie 94. In this story Bruce and his female companion Muffin come across the planete Rygelian, where people are buying cars from Pleasure Centers owned by Silas Mendicant, villain from the prior story. It appears that Mendicant and his patrons aren't paying their taxes which is what gets Bloodletter involved. Bloodletter and Muffin later meet a princess whose father has been drugged by Mendicant. They are able to trick Mendicant after healing her father and capture him once and for all. Not the greatest story (and somewhat confusing at the end), but as a big fan of Fernandez I'm quite happy to see him make a rare appearance. Fernandez's final Warren appearance shows up in the next issue.

The issue concludes with a very strong conclusion to the Haxtur series in "A Time for Dying" by Victor de la Fuente (story & art). Haxtur falls into a hidden underground cave where an old man tells him his quest has ended. He summons a monster and requests Haxtur kill a man, but Haxtur is suspicous and instead releases the man, who attacks the old man, permitting Haxtur to escape. Haxtur then fights a man who looks exactly like him. The 'clone' of him tells him that he is actually Haxtur's physical body, and that Haxtur exists as a spirit in limbo, where he will be forced to die over and over again. Haxtur realizes that he is actually in hell, being forced to suffer for his many years as a mercenary. Haxtur then finally meets the mysterious four men seen in the first story in the series, who reveal themselves to be the four horsemen of the apocalypse. They tell him that as a mercenary in his life he ended up accomplishing much for them, something Haxtur is quite upset to hear. Quite a good end to a series that has been one of the very few bright spots in these late issues of Eerie. While this series comes to an end here, de la Fuente returns with another series, "Haggarth" starting in the next issue.
Posted by Quiddity at 5:31 PM