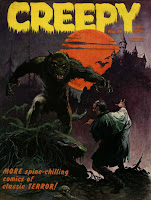 Frank Frazetta tackles the cover for this issue of Creepy, featuring a man confronted by a werewolf. The frontis is "Creepy's Loathsome Lore" by Al Williamson.

First is "Monster Rally" by Angelo Torres (art) and Archie Goodwin (story). A mad scientist assembles a large group of monsters, all in order to find a formula that will give him eternal life. Eventually a town mob attacks him when one of his monsters, a vampire, escapes and attacks the town. The scientist frees his monsters, who kill him rather than attack the mob. The entire castle burns to the ground. There is only one survivor, a small baby... Uncle Creepy!

Next is "Blood and Orchids" by Al McWilliams and Archie Goodwin (story). A doctor assists in a murder investigation where multiple people have been found with their blood drained. He suspects it is because of a countess he met who doesn't use mirrors, brought over native soil for her plants, and doesn't go out during the day. He naturally thinks she is a vampire, but it is actually her blood drinking plants that are the culprit.

Third is "The Damned Thing" by Gray Morrow (art) and Archie Goodwin (story), an adaption of the Ambrose Bierce story. A group of men gather around in a cabin due to the death of the cabin's owner. One of the men, a friend of the murder victim, tells a story about how he believes the man was killed by a creature that is a color that the human eye cannot see. None of them believe him, but as they leave, they are attacked by the creature. A very good adaption (with a revised ending) by Goodwin. The 'Damned Thing' is very scary when it finally is seen.

Fourth is "Moon City!" by Al McWilliams (art) and Larry Engleheart (story). This story tells of a settlement made on the moon. One of the workers who constructs the settlement returns to Earth, gets married, and heads to the moon with his wife. But there they are attacked and killed by hungry dogs who were on the moon all by themselves.

Fifth is "Curse of the Full Moon!" by Reed Crandall (art) and Archie Goodwin (story). A rich man, Henry, has his coach attacked by a wolf, and his driver killed, He encounters an old gypsy woman who tells him that it is a werewolf, and he is to be the creature's next victim. Henry plans to hunt the werewolf with his two hunting buddies and when the werewolf attacks him, he kills it with a silver bladed knife. Because he was bitten however, he becomes a werewolf himself and his killed by his friends.

Last is "The Trial of Adam Link" by Joe Orlando (art) and Otto Binder (story). Adam is turned back on by Dr. Link's nephew, who is able to get him put on trial rather than being immediately destroyed. Adam is villified by the masses and torn apart by the press, except for a single writer, Jack Hall. Adam saves multiple peoples lives around the time of and after the trial, but is found guilty and sentenced to death.
Posted by Quiddity at 7:05 PM

First creepy I ever bought...great issue...Reeds art is super as is the cover...I'm trying to buy the original art for "Curse..."