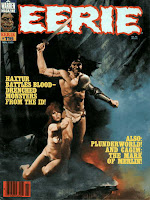 A so-so issue by Enrich starts off this issue of Eerie, dated November 1980. An absolutely dreadful issue of Eerie, there's nothing good here. Sorry for the quick reviews, this issue is just too poor to be able to give it the full coverage I give average and above average issues.

First is "Blackjack", featuring the return of the Rook to Eerie for this issue only. Art is by E.R. Cruz and story is by Rich Margopoulos. As usual this Rook story has multiple stories going on at once. The Rook encounters a giant amoeba. Bishop Dane and Manners go to prehistoric times, kill a few dinosaurs, and get banned permanently from their by some advanced society living back then. Finally, a rival scientist of the Rook's, Blackjack shows up and tries to tamper with things, taking on Kate and Jan.

Next is 'Starwarriors' in the story "Plunderworld". The logo for this story is an obvious ripoff of the Star Wars logo. Art is by Fred Redondo while story is by Rich Margopoulos. This dreadful story is about the adventures of imp like creatures known as the Star Warriors. This story has no connection to the Star Warrior story that had appeared in issue 114. And thankfully, this did not become a continuing series, ending here.

Third is "The Marks of Merlin!" a new series titled "Cagim" by E.R. Cruz (art) and Budd Lewis (story). This new series features Merlin the magician, who meets his prior younger self (called Ambrose) and educates him. At the same time a Dark Queen who had prior dealings with Merlin fights him, but Ambrose, wearing a superhero costume fixes things. Nothing interesting whatsoever here, although additional stories in this series would appear for a while.

Last is the latest Haxtur story, "Warriors and Friends!" by Victor de la Fuente (story & art). A small group of knights find Haxtur and accuse him of being a spy. Haxtur fights them, killing all but one, and taking their horse. A very short story this time, at a mere 6 pages. This series would conclude with the next issue.
Posted by Quiddity at 5:09 PM

This is a good blog, thanks for sharing.