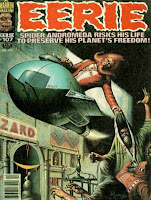 This issue of Eerie starts with a cover by Romas Kukalis featuring Spider Andromeda from Mac Tavish for the second consecutive (non-reprint) issue. Not much here in this issue, only four stories.

First is the conclusion of the Horizon Seekers in "The Last Horizon" by Leo Duranona (art) and Duranona & Cary Bates (story). Jesse, Allison and Merlin continue through the ravished landscape and are abducted by bizarre looking alien creatures that reveal that they have experimented on Earth for millions of years, responsible for the death of the dinosaurs and the apocalypse that caused the Earth to become its current state. The aliens reveal that our three heroes in particular have been observed by the aliens all this time. Merlin sacrifices himelf, resulting in the entire ship blowing up. At that point we break the fourth wall in the story, showing Leo Duranona at his home drawing the story, meeting some friends of his wife who look like cleaned up versions of Allison and Jesse. A bizarre, but very good final part to this fairly good and long running series.

Second is the third "Beastworld" story by Pablo Marcos (art) and Bruce Jones (story). Tyler and Ruth continue to progress in their relationship while the pathetic Thomas rapes Monica. The two pairs continue to battle some giant bugs. Monica eventually knocks out Thomas only to have a flood rapidly approaching. This series continues to dissappoint tremendously from both a story and art standpoint.

Third is Mac Tavish in "Bad Company" by Pepe Moreno Casares (art) and Jim Stenstrum & Alex Southern (story). Rara Avis governor Lazard plots with the evil Gorgo to throw the election to him in exchange for a big payoff. Unknown to him, Gorgo plans to have him killed once the election is over. Spider recovers and says goodbye to Mac Tavish and Ida, trying to warn Lazard of what will happen on election day. Lazard ignores him and is promptly killed by Gorgo's forces seconds after he leaves. Gorgo is now elected governor of Rara Avis as this part ends.

Last is "The Prophecy" by Nestor De Leon (art) and Bill Kelly (story). This story features a girl who is prophesized to rescue the poor people from the tyrants. She eventually marries the prince, becomes queen, and rules the country after he dies in his only battle. She does nothing to rescue the poor from the tyranny, instead having rival lords fight over her. Eventually a large blob like creature arrives, killing the lords, and eventually the queen herself, as the blob was actually the prophecy come to life.
Posted by Quiddity at 4:01 PM

i love your reviews!

I'd love to, but unfortunately those are 2 of the very few Warren magazines I don't own! Hopefully someday!