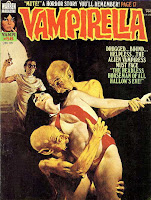 Enrich provides the cover for this issue of Vampirella, featuring Vampi being grasped by two imp like creatures. Jose Gonzalez provides a one page intro from Vampirella in the frontis.

First is "The Headless Horseman of All-Hallow's Eve!" by Jose Gonzalez (art) and Bill Dubay (story). Some extremely good art by Gonzalez here, one of his best Vampirella stories ever. Vampirella and Adam try to solve the mystery of a headless horsemen who is kidnapping young woman. Using Vampi as bait they find the truth, it is actually some men who are trying to sell the women into slavery. Vampi and Adam are able to stop their operations.

Second is "Mute" by Luis Bermejo (art) and Bruce Jones (story). This story tells of a mute boy seeing a psychiatrist, who tries to get him to speak again. He finally does after three years and reveals his past, where he was in love with a girl but too nervous to talk to her. When she drowned in an accident, he kissed her but was caught by some other people, who brought him to a graveyard to find a rotted corpse of a woman, forced him to have sex with it... and he liked it! In the present day his psychiatrist lets him have sex with her but he freaks out and kills her since only dead things are attractive to him.

Third is "Skruffy's Gargoyle!" by Leopold Sanchez (art) and Bill Dubay (story). Skruffy is a young boy who passes away due to illness. His father tells his other son of how gargoyles were created to protect the souls of the dead that they watch over. A demon comes for real to take Skruffy's soul, but the gargoyle along with his family save him.

Fourth is "Cavalcade of Monsters" by Ramon Torrents (art) and Gerry Boudreau (story). This story is a murder mystery surrounding a movie starring a vampire, Frankenstein and werewolf. When the actor starring as the vampire dissappears, the film's leading lady hires a private eye on behalf of the producer. In the end the private eye finds that the producer himself is behind the murders and solves the case.

Last is "The Free Lancer" by Jose Ortiz (art) and Bruce Jones (story). This story takes place on the planet Deimos and surrounds a TV show where people can sign their life away to a TV show that airs executions. The person will be paid $10,000 per week until they are randomly drawed as being the person to die on that week's show. The wife of one of the people who dies on the show comes up with a complicated scheme using robots to get revenge on the show's owner.
Posted by Quiddity at 4:10 PM